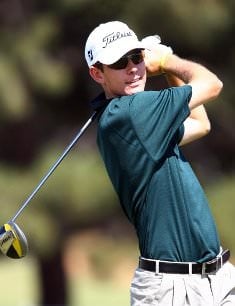 Dylan Frittelli, 19 year old defending champion, lost in a playoff against Australian Jordan Sherratt after both players finished with a 72 hole total of 279, five under par, in the Barrett Amateur Championship on Saturday.

Playing at the Algonquin Golf Course in St Andrews by-the-sea, New Brunswick, Canada, Sherratt started the final round two shots clear of the Frittelli, who lives in Pretoria but is currently on a golf scholarship at the University of Texas.

After the first nine holes the South African was in a commanding position having recorded three birdies and a bogey, going out in 34, two under par, giving him a three shot lead over his Australian opponent. Sherratt struggled from the first hole recording two consecutive double bogeys, recovering with birdies on holes 3 and 5 but dropping a shot again on the ninth. He went out in 39, three over par.

However regulation golf down the back nine is all the exciting young Irene Golf Club member could muster. He crucially dropped a shot on the par four 16th, coming home in 70, one under par.

Sherratt on the other hand recorded three birdies and a bogey, down the back nine, to end up with a final round of 72, one over par. Also crucially, one of those birdies was on the par 5 17th hole, which enabled him to draw level with the 2008 Barrett Amateur Champion.

Only one hole was required in the sudden death play off between the two leaders. The latter hit his second shot stiff, on the par 4, with an easy putt for a birdie which Frittelli could not match.

Three other South Africans participated giving a good account of themselves and the state of amateur golf in their country.

18 year old North West amateur, and current South African and Zimbabwe Amateur Stroke Play champion JG Claassen had a final round of 70, one under par, to finish on 280, four under par, leaving him tied in third place.

Silver Lakes Country Club member in Gauteng North, Leon Knoll, recorded a final round of 73, two over par, giving him a 72 hole total of 287, three over par. He finished tied in seventh place.