Frittelli leading amateur after first round of SA Open 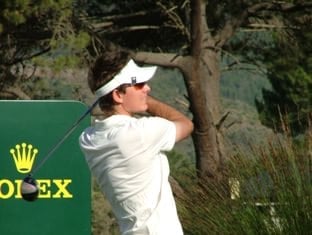 Dylan Frittelli fired a first round score of 69, three under par, to finish tied in eleventh place in the South African Amateur Open Championship, being played over 72 holes stroke play.

He is the leading amateur in the field four shots clear of the next best, the Glacier SA Amateur Champion, Ryan Dreyer.

The nineteen year old Irene Country Club golfer from Guateng North is however five shots off the pace. Martin Erlandsson, of Sweden, leads a field of 151 professionals and 5 amateurs, with an eight under par 64. Exploiting the benign weather conditions and the immaculately prepared Jack Nicklaus designed Pearl Valley Golf Estates, situated just outside Paarl in the Western Cape, he took a one shot lead over local Paarl professional Dawie van der Walt and Pablo Martin of Spain.

Teeing up in the afternoon field, Frittelli enjoyed cool cloudy weather conditions, going out in 36, recording three birides and bogeys, and came home in 33, made up of three birdies, two of which were over the last two holes he played.

“My first nine was rather erratic,” said the tall University of Texas freshman, after his round. “I was hitting the ball in the wrong places and paying for it. We don’t play many stroke play competitions, this being my first in about two months,” he said in explaining his round.

Dreyer, who recorded a 73,had a torrid outward nine, recording a four over par 40, having started on the 10th tee. He came home in a respectable 33, which included three birdies. His score places him tied in 60th place. With the second round cut at 65th place and ties, the Killarney Golf Club amateur will have to do better than par to secure himself a place in the last two rounds.

JG Claassen, the exciting eighteen year old Orkney Golf Club amateur, recorded a 74, two over par. Like Frittelli he played his first nine holes erratically recording two bogeys, a double bogey and three birdies, turning in 37, one over par. He played his back nine, being holes one to nine, also in 37 comprising a solitary birdie and two bogeys. He is lying tied in 78th place along with thirteen other players.

Adrian Ford, like Dreyer, teed it up in the morning. Starting from the first tee he went out in 38 and came home in 37 for a 75, three over par. Being tied at 92nd, the Durbanville Golf Club member, and current holder of the Freddie Tait Trophy, will also be looking for an under par second round score if he is to have a stab at getting his name onto the trophy as the leading amateur on conclusion of the final round on Sunday.

The amateur who struggled the most was Leon Knoll. “I have really been struggling with my game over the last couple of months,” said the disappointed Silver Lakes Country Club golfer from Gauteng North after his round. He recorded a nine over par 81 from which he is now unlikely to recover sufficiently to stand any chance of making the halfway cut.

The second round is being played today. On conclusion there will be a cut to leading 65 professionals and ties, those players making the cut will contest the final 36 holes which will be played on Saturday and Sunday.