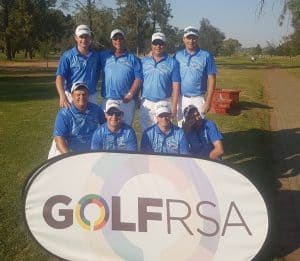 Free State powered to two decisive victories and the lead in the B-Section battle for promotion on day three of the SA Mid-Amateur Inter-Provincial Tournament on track at Kimberley Golf Club; credit GolfRSA.

KIMBERLEY, 10 October 2018 – It’s still tight in the B-Section battle for promotion, but Free State fortified their odds with two big wins in the third round of the South African Mid-Amateur Inter-Provincial Tournament, while defending champions Central Gauteng continued their course of destruction in the A-Section battles at Kimberley Golf Club on Wednesday.

With four convincing victories in the bag, Central Gauteng did not let up as they went into battle with Gauteng North in round three. The Lions swept to a 4-0 lead in the foursomes and hammered the Daisies in the singles to triumph 10.5 – 1.5.

With 10 points to their credit and a massive haul of 48.5 game points, it will take a minor miracle to dislodge the ‘Red Brigade’ from the top spot of the A-Section log.

The three-way match between Western Province, Ekurhuleni and Southern Cape ended with the Garden Route side pulling the short straw.

While Central Gauteng and Western Province enjoy a fourth round bye, Ekurhuleni will go into battle against North West, while Southern Cape, Gauteng North and KwaZulu-Natal face off in Thursday’s three-way match.

Free State showed enormous heart against Eastern Province and Northern Cape to pull through two vital victories at the halfway stage of this year’s championship.

“We were 2-all with Eastern Province after the foursomes, and 2.5 – 1.5 up against Northern Cape and neither team gave an inch in the singles,” said Free State skipper Joseph Fourie. “Eastern Province a couple of early points and we won a few against Northern Cape, but the guys had to fight hard at the back of the field to make the 4 points a reality.”

Halves from Lourens Erasmus and Jacques Schutte sealed a 7 – 5 win.

The captain was supported by Jandre Nel, who knocked out Nico Jacobs 3 & 2 and Jacques Schutte, who took out Basil Nortje 2 & 1. Erasmus, Reyneke and Pieter Swartz pushed their games to the end and a trio of 1-up wins fixed an 8.5 – 3.5 result.

“We’ve never won promotion, so it’s really a big goal this year,” said Fourie. “The guys are fired up and seriously motivated to make it a reality. The two matches today were touch and go, but the way our guys fought to pull this through speaks to the heart and spirit of this team. Today’s result goes a long way in bringing us closer to the finish line.

“I’d like to applaud the greenkeeper and staff at Kimberley Golf Club for the incredible work they’ve done in getting the course ready for this year’s IPT. We haven’t seen rain in this region for a long time and they have worked miracles to present us with a course in the best condition we’ve ever seen around this time of the year.”

Free State replaced Eastern Province at the top of the B-Section standings, courtesy of the double success, and leads the field with 8 points and 31.5 game points.

Eastern Province mowed down Northern Cape 9 – 3 to stay in touch in second place on 6 points and 34.5 game points. A 7.5 – 4.5 result against Mpumalanga helped Boland to third in the standings on 4 points and 28.5 game points.

Free State faces Limpopo in round four, while Border, Mpumalanga and Northern Cape tackle each other in Thursday’s three-way match. Boland and Eastern Province have a rest day.