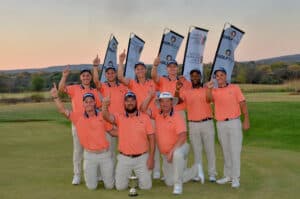 24 September 2022 – Free State needed to win their final match and hope that KwaZulu-Natal slipped up in theirs if they had any chance of winning the South African Inter-Provincial Tournament B Section and return to the A Section for the first time since 2018.

The first part may have been in their own hands, but things were looking dire when they halved the foursomes and then lost the first two singles matches against Boland, who were also in with a shout of winning the tournament.

The comeback started with singles wins by Pieter Cronje and Eugene du Plessis. Christiaan Heyman secured a vital half point by winning his last hole before banker Stefan Griessel, playing at No 1, secured another point with a 6&4 win over Pieter Rosssouw.

Griessel ended the week with a perfect singles week of six out of six wins, including wins over South African No 2-ranked Jono Broomhead and No 2-ranked junior Ivan Verster.

With KwaZulu-Natal slipping up against Southern Cape, ultimately the destination of the cup came down a humdinger of a match between Free State’s Gary Kemp and Boland’s Dylan Kayne.

Kemp was 3-up with five holes to play but saw his lead devoured as Kayne made three birdies in four holes to square the match with one hole to play. A 20-foot birdie putt on the last saw Kemp emerge as the hero of the hour, propelling Free State to an unlikely victory. 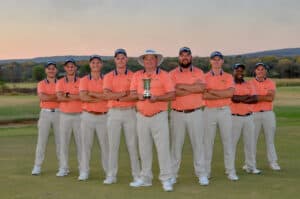 “This game is just amazing,” said Free State manager Charles Liversage. “For a while I thought we were dead and buried, but the team never gave up and they just kept on fighting. Gary had missed the green on 18, but he hit a wonderful chip that ran about 12 feet past the hole, leaving him with a downhill putt for birdie.

“Dylan had a par putt left after pushing his birdie effort past the hole, and the entire promotion was squarely on Gary’s shoulders. That birdie putt on the last was unbelievable. I can’t remember when I last felt so nervous watching a putt, but when it dropped, the players went wild.

“Our team played so well this week. I want to thank the other teams for the spirit in which the games were played this week, which makes the win even more memorable. It was an incredible journey this week. All glory to our Lord! We can’t wait to tee it up in the A-Section next year.”

Free State President Butch Lombard watched the entire round unfold on live scoring and via WhatsApp updates. “I aged 10 years waiting for the outcome,” he joked.

“During their first-round three-way match, they had a huge lead on Mpumalanga and had just started to turn tide against KwaZulu-Natal in the singles when play was called off due to dangerous conditions. After losing that match, they really doubled done to put themselves in with a shout on the final day.

“We have been fighting since our relegation in Oubaai to get in the top draw. I am so incredibly proud of the fighting spirit these eight players showed throughout the week and their manager, Charles Liversage. who kept them positive and hungry for the win; a well-deserved reward for an incredible performance.”

KwaZulu-Natal finished runners up for the second straight year, while Boland finished in third place ahead of Southern Cape. Border claimed fifth spot, ahead of hosts Limpopo, with Mpumalanga taking the wooden spoon.