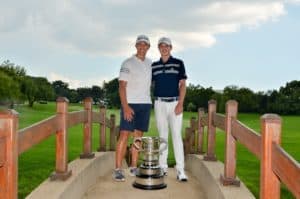 2. Jayden Schaper celebrates his Freddie Tait Cup victory with caddie – and dad – Ryan at the 2020 SA Open hosted by the City of Joburg at Randpark Golf Club; credit Ernest Blignault.

11 January 2020 – Not since Ernie Els in 1989 has an amateur finished in the top six of the world’s second oldest championship, but 18-year-old Jayden Schaper did just that on Sunday in the South African Open, hosted by the City of Joburg, at Randpark Golf Club.

Paired with defending champion Louis Oosthuizen over the first two rounds, the GolfRSA Nr 1 fired rounds of 65 and 67 to go into the weekend just one off the pace.

Battling a balky putter on moving day, Schaper nonetheless kept pace with the frontrunners and a round of 69 saw him start the final day just three shots behind leader Oosthuizen.

The flat-stick was stubborn once again, though, and he stumbled around the turn, but Schaper found the cups for back-to-back birdies on 13 and 14 and brought the crowd to their feet with a chip-in birdie on the 18th to close with a one-under-par 70. 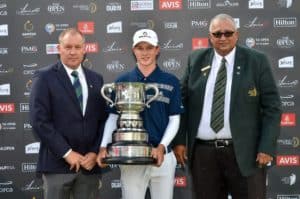 A 13-under total earned the Benoni teenager a share of sixth overall and – as the leading amateur – he joined the illustrious list of past winners whose names are engraved on the Freddie Tait Cup.

Next to 2006 sits the name of Branden Grace, who fired a 62 on the Firethorn Course to race to a three-shot victory.

Although Schaper didn’t emulate Denis Hutchinson – who won both trophies in 1959 – he now owns the record as the fourth highest amateur finisher in the SA Open, overhauling Jean Hugo, who finished ninth at Stellenbosch Golf Club in 1999.

David Suddards was second in 1976 at Durban Country Club and Els placed fourth at Glendower.

“It’s a huge privilege to be mentioned in the same breath as Ernie. He is a four-time Major winner. That’s a pretty big name. Ernie is someone I’ve looked up to because he has been one of the most consistent golfers to play the game. It’s pretty cool to see my name up there with his and other names like that,” said Schaper. “It was a special week, and one that I’ll never forget.

Like Grace, the SA Open is one tournament Schaper also wants to win. 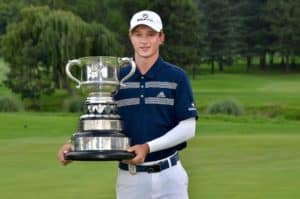 “I really want to win this one. Seeing Branden coming down the stretch holing putts, watching Louis win last year and so many great SA golfers in the past, I also want my name on the big trophy.”

Records are important to the rapidly-rising Schaper.

He is the only golfer in history to record the ‘Grand Slam’ of South African Junior National titles – the Nomads SA Boys U-13, U-15, U-17 and U-19 – and also clinched the elusive SA U-19 double when he lifted the stroke play and match play titles at the age of 16.

In March last year, he shot a course record 62 en route to winning the SA Stroke Play Championship at De Zalze Golf Club and became the first South African winner of the prestigious Junior Players Championship at TPC Sawgrass in 2019.

“I like achieving records,” he admits. “Now I’ve won the Freddie Tait Cup, winning the SA Amateur at Royal Johannesburg and Kensington next month is high on my bucket list. It’s the only one left before I will look at joining the pro ranks. I’ll be gunning for in the future and it will be so much more special because of the memories created this week.”

It was not long ago that Schaper was chasing autographs and he enjoyed giving back to the youngsters this week.

“I was doing the same thing not too long ago. We were living at Serengeti when they hosted the SA Open there two years in a row (2011 and 2012) and my cousin and I ran around looking for golf balls. Getting a pro’s glove or hat was really special,” he said. “Walking down the fairways and hearing people shout your name this week was something else and something I will never forget. It will be hard to top this experience.”

Although he was two-over through 10 holes, Schaper dug deep to play the last six holes in three-under.

“I got off to a rough start today, but I knew eventually something would drop,” he said. I was hitting the shots I needed to hit, I was so close to a good score. I love the pressure of it.

“Playing in the final few groups of the SA Open was a dream come true. I thrive in that sort of environment with so many people watching. I chipped in at the last and the crowd went crazy, I love moments like that.

“I’m glad I could keep my cool in such a pressure environment in a tournament like this. Just to show I can compete with these guys, in just my second European Tour start. I still have lots to learn and I’m grateful for the opportunity.”

With his top performance at the SA Open in the bag, Schaper heads to Dubai next week where he will rub shoulders once again with the cream of the European Tour in the Omega Dubai Desert Classic, for which he has received a special invite.

One things is for sure, a glittering future in golf awaits for young Schaper.

South Africa’s leading junior Casey Jarvis also produced great shots down the stretch for a 67 to rocketed the GolfRSA Nr 2 to a tie for 36th on seven-under 277 and fellow GolfRSA National Squad member Christo Lamprecht continued to get the rust off after six months away from the game to finish on eight-over.

Schaper and Jarvis will re-unite for the GolfRSA Senior Proteas team at Leopard Creek in early February, to challenge in the 54-hole team competition at the African Amateur Stroke Play Championship which kicks off the annual Africa Swing.

The other two members of the team are Martin Vorster and Sam Simpson, who played in the International Team with Schaper in the Junior Presidents Cup in Australia last December.

Written by Lali Stander and Michael Sherman on behalf of GolfRSA.