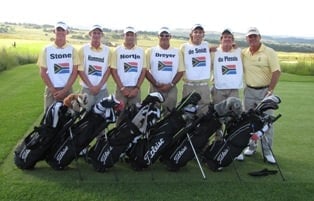 It was a Test Match of two parts, certainly as far as the six man South African team was concerned.

Thursday’s first round the French were in dominant form. The nine points up for grabs going seven to the visiting team and two points to the host nation. A day they would sooner forget.

Friday’s final round was better for the Proteas, five points going the way of the South Africans and their opponents the balance, namely four.

“We played better in the final round. I think the boys settled down after the tough first day, they knew what to do. They certainly played better,” said Colin Burger, the team manager and president of the South African Golf Association.

The morning betterball went the way of the Proteas, winning two of the three matches. With the cumulative match standings at eight points to France and four to South Africa, the Proteas knew that they had to win all the afternoon singles matches to have any chance of wresting the trophy away from the winners of last year’s Test Match.

Both Ruan de Smidt and CJ du Plessis, who went out first and second for South Africa, winning their matches and giving the South Africans reason for a bit of optimism. De Smidt dominated his encounter against Edouard Espana winning 6 and 5. However Daniel Hammond lost his match.

With the French having now won nine points, they could not be beaten.

The remaining two matches both went to France, Riekus Nortje losing to Clement Berardo 3 and 2 and South African team captain, Ryan Dreyer to the talented Alexander Levy 3 and 2.

“Both Nortje and Dreyer fought hard. Nortje turned one up and then unfortunately lost three on the trot coming home. Dreyer was all square going through hole ten. He too lost three holes in a row which put him on the back foot for the remaining holes,” said Burger.