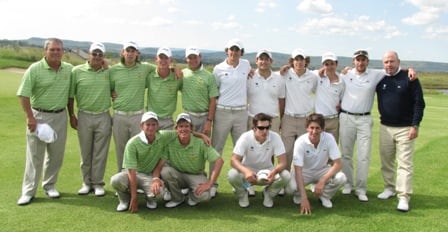 South African amateur golf team were given a lesson in how to play singles when they lost all six matches to France during the first day of the two day test match taking place at Gardener Ross Golf and Country Estate outside Johannesburg.

In the morning foursomes, the South Africans started well winning two of the three matches to take a one point lead.

However after lunch the tables turned convincingly when the visitors dominated the afternoon singles taking all six points at stake.

This means that the cumulative points standing at the end of the first day’s play was France 7 points to South Africa’s 2. With a total of 18 points up for grabls, nine of which are being played for on Friday, the visiting French team need to win two matches in tomorrow’s final round to hold onto the trophy they won last year.

“The difference between the two teams was the way they played their short game,” said a disappointed team manager and South African Golf Association President Colin Burger. Speaking after the conclusion of play he said that the French players on and around the greens were magnificent.

The final round on Friday is made up of three betterball matches followed by six singles, the former being played in the morning and the latter in the afternoon.

“We may change our batting order a bit tomorrow, we will see,” said Burger, revealing what must be his only card left to play in his sides near impossible task of making a contest out of the test match.