France edge ahead on day one 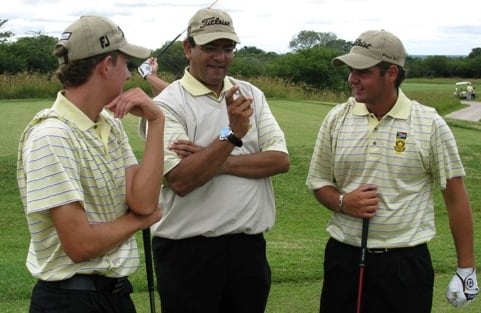 The young French team edged one point ahead of South Africa after the end of day one of their amateur golf test match today, finishing the day on 6½ points.

Enjoying the cool cloudy weather that prevailed in the morning, at Euphoria Golf Estate in the Waterberg, the South African team started well in the Betterball. They turned up in all four matches.

Nicol van Wyk and Adrian Ford, who turned 4 up in their match, watched their French opponents, Mayel Cheiku and Frederic Abadie, blitz the back nine by recording six birdies in seven holes to turn things around completely, securing a surprise win for the visitors, 2 and 1.

South African team captain Steve Williams and his playing partner Jake Redman will be disappointed with their half, in the morning. They were dormie two up only to lose the last two holes to halve their match against Kevin Turlan and Stanislas Gautier.

After lunch it was the French team’s turn to dominate proceedings.

They won 5 of the eight singles matches.

Amongst the South Africans, Stevie Ferreira won handsomely, 4 and 3, against Stanislas Gautier. In form Dean O’Riley won his game as did Coenie Bester. However the rest did not fair well. Jake Redman took Jerome Lando Casanova to 18, but will be disappointed with his last putt. He missed a short putt for a half, to go 1 down.

Adrian Ford lost two holes to eagles, in his match against Johann Lopez-Lazaro, combined with the fact that his putter went cold on him during his afternoon round.

Tomorrow is the final day of the annual test match between these two countries. They play foursomes in the morning and singles in the afternoon.