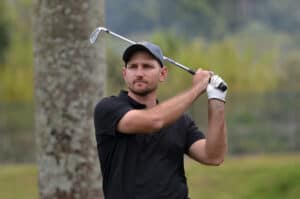 Boland captain Karl Ochse scored the biggest scalp in the second round of the 2021 SA Inter-Provincial when he routed Sean Coetzee 9 & 8 in the singles to help his side defeat Border 9 – 3 at San Lameer Country Club; credit GolfRSA.

14 September 2021 – Western Province and North West share pole position after two days of A-Section action at San Lameer Country Club, while Boland and Eastern Province continued their rampage in the B-Section battle for promotion at the 60th SA Inter-Provincial Tournament.

A-SECTION
Western Province and North West both closed 8 – 4 victories to overthrow Central Gauteng for the top spot in the log, while the 2019 champions Ekurhuleni had to dig their heels in to claim their first win of the week.

The side routed Central Gauteng 3 – 1 in the foursomes and continued their dominance in the afternoon session, with 3 & 2 victories going the way of new caps Jack Buchanan and Shaun le Roux, Sean Cronje (4 & 2) and the skipper Andrew Georgiou. GolfRSA National Squad member Sam Simpson at No 1 beat Adam Breen 4 & 3 to put the seal on a commanding performance from Province.

North West new cap Jordan Wessels and Jaco Anderson put the side back in the driver’s seat with 3 & 2 wins, and they were backed up by Oliver Goldhill, Christiaan Burke and their captain, Doug McCabe.

Meanwhile Ekurhuleni needed to turn things around after a 1-point loss to Central Gauteng on day one, but Gauteng North made the defending champions work for their win. 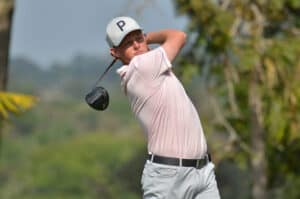 New cap John-William Blomerus helped Ekurhuleni to a 6.5 – 5.5 result on day two of the 2021 SA Inter-Provincial with his commanding 7 & 6 win in the singles against Gauteng North at San Lameer; credit GolfRSA.

The Roses took a 2.5 – 1.5 lead into the singles and new cap John-William Blomerus immediately took their tally to 3.5 when he punished Handre Truter 7 & 6. Chris van Tonder won 3 & 1, but then Daisies started hitting back with Gregg Gilson, Armand van Dyk and Dawid Opperman racking up points. Casey Jarvis, at No 1, took Ekurhuleni to 5.5 and Francois Blaauw and Aneurin Gounden sealed the 6.5 – 5.5 victory when they halved against Tyron Taylor and Francois van der Walt respectively.

Western Province will try for three in a row when they tackle Ekurhuleni on day three, while Southern Cape face off against Central Gauteng and North West go head-to-head with Gauteng North.

B-SECTION
Boland and Eastern Province continued to fire on day two, while the moral in the Free State shot sky high after a decisive 9 – 3 victory against Mpumalanga.

Boland capitalised on a 3.5 foursomes lead, with skipper Karl Ochse leading the way with a 9 & 8 win at No 8. Liam Millard, Cedric Rooi, Crismar Engelbrecht, Ethan Smith and LB Boshoff reeled in four more points to hand Border a 9.5 – 2.5 hiding.

Boland shares the top spot in the log on 4 points with Eastern Province, who started just as strong in their foursomes by taking 3.5 points off KwaZulu-Natal. 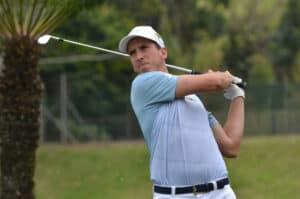 Free State No 1 Carlos Laranja won his singles game 5 & 4 to help his side to a 9 – 3 victory on day two of the 2021 SA Inter-Provincial against Mpumalanga at San Lameer; credit GolfRSA.

Smarting after a 3 – 9 drubbing from Eastern Province on the opening day, Free State turned the tables on Mpumalanga and won their clash 9 – 3.

The two teams were tied after the foursomes, but Free State shifted into high gear in the afternoon session, with Pieter, Letsoso Letsai, Stephan Meintjes, Ge-Rico Muller, Stefan Griessel, Christiaan Heyman and Carlos Laranja all coming up trumps.

As the battle for promotion intensifies, Boland will hunt for a third successive win when the side faces Free State in the third round, Eastern Province will try to dispatch Border and host union KwaZulu-Natal will aim to turn the tide when they face Mpumalanga.