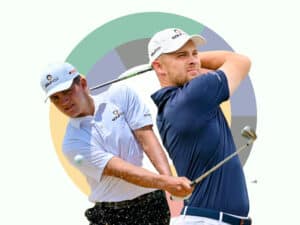 2 December 2022 – Kyle de Beer closed with an eagle while Christiaan Maas found one on the first hole of the opening round of the 112th Investec South African Open where their respective scores of 69 left the two leading amateurs in a 13-man tie of the 25th spot at Blair Atholl Golf and Equestrian Estate on Thursday.

De Beer wasted little time in getting on about his business on Thursday, opening with three birdies in his first five holes before bogeys on the seventh and ninth holes threatened his progress.

He steadied himself after the turn and the result was a run of straight pars as he sought to keep the big numbers off his scorecard. He gained another shot on the 15th but gave it back on the 17th before a much-welcomed eagle made it onto his scorecard for a solid 69 on day one. 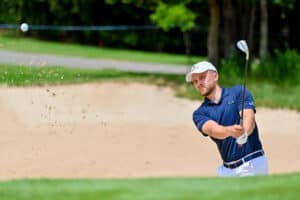 “It’s awesome playing with George and Danie,” he said. “They are both so professional and they both treated me very well. They are really friendly, and I appreciate this experience. I’m looking forward to playing with them in today’s second round and seeing what I can learn from them.

“I started off very nicely; three-under through five and that took a lot of pressure off, and I just cruised from there. One or two sloppy drives around the turn cost me a shot or two but I rallied back nicely towards the end to finish strong. I’m really happy with my start this week.”

The Port Elizabeth Golf Club member, who is also the third-best amateur in the country, will look to replicate his first-round showing today as the battle for the coveted Freddie Tait Cup intensifies.

Awarded to the highest-placing amateur making the cut after 36 holes of this second-oldest national open in golf, De Beer will have stiff competition as 2022 Brabazon Trophy winner Maas also has his sights firmly set on the silverware.

Having already won in a professional tournament this season – the first tournament of the Altron Big Easy Tour this season at Blue Valley Golf Estate – 19-year-old Maas returned to South Africa after a superb start to his first season with the Texas University Men’s Golf Team.

Teeing it up in his third Investec South African Open tournament, Maas said he felt very relaxed on day one.

“It was fun; relaxed,” said Maas of his opening 69. “I think the new golf course suits me a lot better than the Gary Player Country Club, because here you can hit it long and there’s a lot of room for your tee shots. It’s also good to be back at the SA Open with no Covid-19 restrictions. 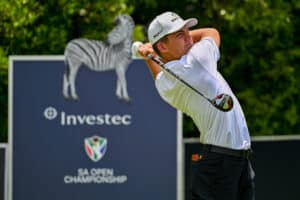 “I started off well; made an eagle on one, which was great because I didn’t think that was going to happen. But I had a big wobble between six and eight and had a double in there. Then, from nine to 18, I played better golf and I made five birdies in my last 10 holes. That helped a lot.”

With the second round determining who will continue the journey on the weekend, the other four GolfRSA National Squad members in the Freddie Tait Cup chase will be gunning for low rounds.

Reigning Amateur champion Aldrich Potgieter and 2022 SA Stroke Play champion Jono Broomhead, both making their first appearance in the Investec SA Open, both opened with rounds of 71 and will start the second in a tie for 61st.

“Obviously we all want to be the leading amateur on Sunday and it’s good to have stiff competition for the Freddie Tait Cup,” Maas said. “Two years ago Casey Jarvis was the only survivor, and last year Yurav was one of only two amateurs to make the weekend, so it’s exciting to have so many in the mix.”