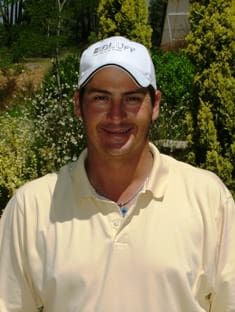 Ryan Dreyer recorded nine birdies on his way to a pace setting 66, six under par, in the first round of the 36 hole Qualifying of the Glacier SA Amateur Championship being played at Benoni Country Club today.

The 36 year old Killarney Golf Club member, with eleven years of professional golf experience, was reinstated as an amateur at the end of 2008.

Playing in wind by clear hot weather, Dreyer’s birdie blitz was made all the more remarkable by the fact that he had no practice round and confessed to having last played the Benoni Country Club layout five years ago.

One shot back are three players Kyle Lucas, Frenchman Johan Lopez Lazaro and former Zimbabwean Dean Burmester. The first two were the leaders in the clubhouse on conclusion of the morning round.

Lucas, like Dreyer, played the course ‘blind’ in that he too did not have a practice round and last played the course three years ago. But unlike Dreyer, he chose to not use a yardage book. His lack of course knowledge showed when on his first hole, the par 5 10th, he over hit his approach, by some 10 metres, resulting in his only bogey of the day. He went on to add six birdies to his card.

Johann Lopez Lazaro, 19 years of age and plays his golf out of the P Country Club in Paris, carded an eagle at the 1st hole (his 10th ) and five birdies. He dropped shots at the 3rd and 6th, both of them as a result of three putts.

Dean Burmester, the son of a professional golfer, learned his trade in Zimbabwe. He is now a member of the Schoeman Park Golf Academy, in Bloemfontein. The 19 year had three birdies going out (having started on the 10th) and came home recording four birdies and two bogeys.

Pre tournament favourite, Dean O’Riley recorded a level par 72. He said, after his round, he struggled from tee to green, with this in mind he was reasonably satisfied with the outcome.

In the International Team Event, O’Riley and Adrian Ford (75), of South Africa, lead on 147, three over par. They are three shots clear of the team from Canada, made up of Lindsay Renolds (72) and Mathieu Rivard (78).

The final round of the Qualifying and the International Team Event is being played tomorrow. The top 64 players qualify to compete in the match play competition, which commences on Tuesday, to determine the Glacier SA Amateur Champion of 2009.