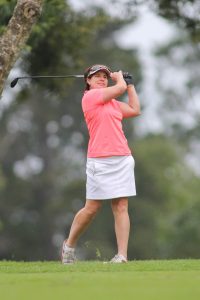 Southern Cape golfer Sandra Winter will have to go low in Wednesday’s final round to claim a record fifth victory in the SA Women’s Mid-Amateur Championship at Krugersdorp Golf Club; credit Pieter Els.

KRUGERSDORP, 6 November 2018 – Former champions Vanessa Smith and Sandra Winter will have to pull out all the stops in Wednesday’s final round if either player hopes to extend their winning record in the SA Women’s Mid-Amateur Championship.

Liezl Smit set the first round target with a four-over 76 at Krugersdorp Golf Club.

She began the second round three shots clear of Smith from Western Province and six clear of Southern Cape’s Winter. The KwaZulu-Natal golfer increased her chances to bag a maiden national title with another round of 76 in Tuesday’s second round.

Smit leads the field on eight-over 152 and will head into the final round with a comfortable cushion on the seasoned champions.

Winter said that the thunderstorms on Monday afternoon softened up the course, but the greens were unexpectedly firm.

“We had quite a bit of rain and we thought the greens would be softer, but they actually firmed up overnight, which made the approach shots quite tricky,” said the Kingswood golfer.

“It was difficult to get it close and putting was already tricky, so scoring wasn’t easy. I gained a bit of confidence going five shots better today, though. I know I need a really good, low round to win and I’ll give it a go tomorrow.”

Carina Theron also held on to her overnight lead in the B-Division.

The Bloemfontein golfer added an 86 to her opening 85 to move to 171. Valda Ford from Randpark posted 85 to finish in second, just one off the pace, while Isabel Verwey from Bosch Hoek will start the final round in third place on 178 after rounds of 90 and 88.

Angela Krugel leads the C-Division on 69 points after rounds of 34 and 35. The Rustenburg golfer is one point clear of Rosa-Linda Wessels from Durbanville Golf Club and local golfer Riana Joubert.

The Services golfer carded rounds of 82 and 88 to edge out Theron by one shot for the top spot. Ford is third on 172, and former SA Women’s Mid-Amateur champion Sonja Bland from Southern Cape is fourth on 175.