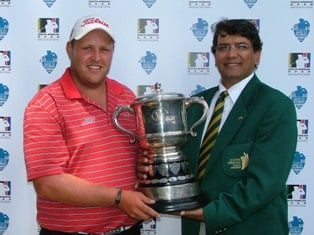 Adrian Ford signed for a final round of a 73, one over par, today finishing with a 72 hole aggregate of 289, one over par, and in so doing wins the prestigious Freddie Tait Trophy as the leading amateur in the 2008 South African Open Championship.

“Great, this is the best week of my life,” said an elated Ford on receiving the trophy from South African Golf Association President Enver Hassen. “I am particularly proud as I get my name on the trophy along with that of my coach Ben Fouchee and Ernie Els who, through his Foundation, has done so much for me.”

Ford played steadily over the front nine, today, turning in 37, one over par, after recording two bogeys and a solitary birdie, on the 2nd hole. On the back nine he bogeyed the 10th, had four putts for a double bogey on the 11th, birdied the par 5 13th hole as well as the final two holes of his round for 36.

In looking back over the week, Ford said that the way the professionals play competitive golf only highlighted to him how much work he still has to do to try and get to their level. “The real difference between where I am and some of the professionals is in the experience, their short game is deadly, they putt consistently and they make few silly mistakes,” said the 21 year old Durbanville Golf Club member.

On the future, Ford said he is going to work hard to improve his South African Golf Association Player Ranking, which is currently 4th. “I intend playing amateur golf for the whole of next year. I will see how my game is towards the end of 2009 and will decide then whether or not to pursue a career in the professional ranks.”