Ford vs Dreyer in the Final

BENONI (5 March 2009) – They are separated by 15 years in age and are at vastly different stages in their careers. But Adrian Ford and Ryan Dreyer share one thing in common in that both are through to their first Glacier SA Amateur match play final at Benoni Country Club on Friday.

Ford, the 21-year-old Western Province golfer ranked second in the country, beat Gauteng North’s Leon Knoll 5 and 4 in the quarter-finals on Thursday morning and then knocked out South African number one Dean O’Riley 3 and 2 in their semi-final that afternoon.

Dreyer, a 36-year-old former professional, played a full 36 holes on Thursday as he beat first Coenie Bester 2up in the quarter-finals and then Trevor Mahoney 1up in the semi-finals.

Ford was delighted to have edged O’Riley in a semi-final match he never looked like winning on the front nine. “I couldn’t find a fairway on the front nine. I think I was trying to hit the ball too hard. So on the back nine I tried to focus a bit more on alignment,” he said.

They were all square after nine, and Ford then clinched the match by winning four consecutive holes with his birdies on 11, 12 and 13 and O’Riley’s bogey on 14. “It was a good game, but that stretch kind of changed it a bit. I’m really ecstatic to make my first match play final.”

Dreyer also struggled with a few loose swings and had to rely heavily on his short game in both his matches on Thursday.

Against Bester in the quarter-finals he had only 12 putts on a back nine where he got up-and-down “so many times it was scary”.

Then against Mahoney in the semi-finals he was 3up with four holes to play, before Mahoney hit back with birdies at 15 and 16 and Dreyer handed him the 17th as well. But again his short game clinched it for him with a good birdie at the last. 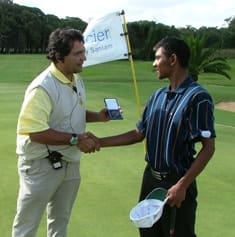 “It was a tough grind mentally but I’m happy to have pulled it through,” said Dreyer, who decided to get himself reinstated as an amateur to fulfil a dream of gaining national colour colours.

“I never had much of an amateur career. I left for College in the United States and then came back and turned professional. So I’d love to get my Protea colours for golf.”