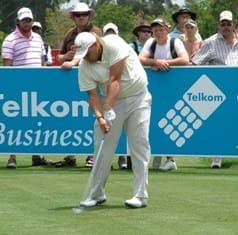 Adrian Ford recorded a 36 hole score of 141, three under par, to be the only amateur under par after today’s second round of the South African Open Championship which was played at Pearl Valley Golf Estates, near Paarl, today.

The 21 year old Durbanville Golf Club member was also the only amateur to make the 36 hole cut, which was set at 143, one under par, which puts him on course to win the prestigious Freddie Tait Trophy. This award is given to the leading amateur after the conclusion of the championship on Sunday.

Leading the 98th SA Open Championship after 36 holes was little known European Tour member Michael Lorenzo-Vera. The tall Frenchman recorded a seven under par 65 today to finish with a 36 hole total of 132, twelve under par, two shots clear of the field.

With one of the strongest fields ever assembled for the SA Open, Lorenzo-Vera will not be sleeping comfortably in the knowledge that some of the world’s leading exponents in the professional game are lurking not far from the top of the leaderboard. These include Lee Westwood (68), Ernie Els (67) and Charl Schwartzel (65) all three of whom are on ten under par after 36 holes.

As far as the amateurs participating, it was the Ernie Els and Fancourt Foundation member, Adrian Ford, who emerged most successful after 36 holes.

Starting on the back nine he recorded birdies on hole 13 and 14 to get to four under par for the championship. On hole 16 he put his ball into the water hazard, which runs down the right side of the hole, and ended up with a double bogey. He turned in regulation 36. On the 1st hole (his 10th) he put his drive into the left hand fairway bunker, from there into the greenside bunker and then over the green three ending up with a double bogey. Thanks to three more birdies, on hole 3 and 4 and his final hole, the 9th, he got back to one under par for his round.

“I’m just playing my own game which is get the ball onto the fairway and then onto the green. The greens are superb so if you read your putt correctly you stand a chance. Also trying hard not to make stupid mistakes, like I did on holes 16 and 1 today,” he said with a smile after his round.

Playing his last hole, the 9th, today the sturdily built Western Province player hit an almighty drive, rolling about 15 metres past the spectator crossing. “I had a 100m to the green,” he confirmed. With the hole playing about 420 metres means his drive was over 300 metres. “I think it was the adrenalin pumping,” he said jokingly.

Dylan Frittelli tried hard today recording a round of 72, giving him a 36 hole total of 145, one over par, which was not good enough to play the weekend. He should have signed for a one under par round today if it were not for a bogey on the final hole.

Cameron Johnston, 38 year old Milnerton Golf Club member, recorded the best round of the day amongst the amateurs signing of a two under par 70. He finished on 146, two over par. It could have been quite different for the Western Province amateur. He started from the 10th tee, by the time he finished hole 15 he had carded three birdies to be one over par for the tournament. A double bogey on 16 put him back to three over par. Two more birdies on hole 5 (his 14th hole) and 7 got him back to one over par. He concluded his round with a bogey on the 9th.

Jake Redman carded a par 72 today, he finished on 148, four over par. Next best was Derik Ferreira (75) finishing on 153, nine over par. Dean O’Riley struggled today recording an 85 and dropping to the bottom of the leaderboard with a 36 hole total of 159, fifteen over par. Mikhail Tewary (81) finished a further shot adrift of O’Riley.