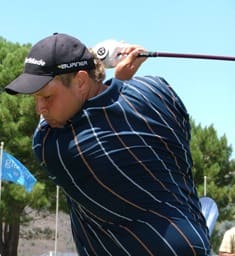 Adrian Ford will renew the keen rivalry with 22 year old Frenchman David Antonelli when they tee up, with 99 other players, in the first round of the South African Amateur Stroke Play Championship tomorrow.

The 72 hole championship is being played at Pearl Valley Golf Estates, the home of the South African Open Championship, which is situated just outside Paarl in the Boland.

“I remember playing David match play in a test match at Chantilly, France, last year. He drew level with me on the third last hole by hitting a five iron into the hole, from 200 yards out,” said Ford with a wry smile. Antonelli, who play his golf out of the Mionnay Golf Club near Lyon, ended up winning the last hole for a half which ensured a French victory over South Africa.

Ford, who is also 22 years old, plays his golf at Durbanville Golf Club in Cape Town, will be looking to establish himself firmly at the top of the South African Golf Association’s (SAGA) Player Rankings with a good showing at Pearl Valley Golf Estates. “I won the Gowrie Farm Invitational recently,” the solidly built Ford pointed out in reply to a question on his current form.

“I am working on a couple of small swing changes with my coach Ben Fouchee, so we will have to see how it goes this week,” said Ford.

Alexandre Kaleka, 21 year old French player from Marcilly, just south of France, has a fine amateur record. He had a great year in 2007 which included winning the British Amateur 36 hole stroke play qualifier. He had numerous top 3 finishes working himself to amongst the top 20 amateurs in world golf. After an unfortunate skiing accident, in which he broke the posterior cruciate ligament of his right knee resulted in a three month layoff after which he had to build himself up to top form through most of 2008.

Nonetheless he is confident of turning in a good performance this week. “I hope the wind blows as I seem to do well is such conditions,” he pointed out, knowing full well what happened in last year’s SA Stroke Play Championship at the same venue. The wind blew relentlessly making the course harder and more difficult to play, conditions Kaleka clearly feels he will thrive in.

21 year old Jake Redman has have five days off and feels ready for to take on the superb layout. The member of Fancourt’s elite squad successfully qualified for the SA Open Championship last year so has a good knowledge of the course rated amongst the best maintained in South Africa.

Young Reading Country Club member Steven Ferreira said he has been practicing hard in an attempt to ‘find something’ to turn a spate of runner up finishes into victory. “I enjoy playing in the wind,” added the 19 year old brother to better known young professional Tyrone.

Another player to watch will be 18 year Leon Knoll, runner up in this championship last year. “I have recorded some of my best finishes in windy conditions,” said the recently crowned Princes Grant champion. “I wrote matric last year so I had to devote a bit of time to my school work, which is not the case this year. I am practicing and playing more,” pointed out the Gauteng North player.

The first starting time tomorrow will be at 07h00 from both 1st and 10th tees. There will be a morning and afternoon field. On Wednesday all players who played in the morning of the first round will tee up in the afternoon, and all those who play in the afternoon on Tuesday get a morning time the next day. There will be a cut to 65 and ties on conclusion of the second round. All players making the cut contest the final two rounds.

For all the latest scores go to: click here