Both Adrian Ford and Derik Ferreira, two of South Africa’s top ranked amateur golfers, qualified for the match play stages of the 113th Argentine Amateur Championship yesterday, which is being played at the Nordelta Golf Course outside Buenos Aires.

Playing the final round of the 36 hole Qualifying, Adrian Ford recorded the best round of the day, a three under 69, to finish tied in 5th place with a 36 hole total of 144, level par. The Durbanville Golf Club member played regulation golf up to 12th hole after which he recorded four birdies, three in a row from the 13th hole, and one bogey, on the final hole.

Derik Ferreira recorded a 36 hole total of 153, after recording a second round score of 74, two over par. The 19 year old Centurion Country Club member in Gauteng North finished tied in 25th place.

“The conditions were bit easier today,” said Ferreira after his round. “There was no wind. The greens are quick, the course is a lot like Pearl Valley but without the trees. There is a lot of water, on almost every hole.” On his second round he said, “I was not happy with the way I finished.” He turned three under par, after recording three birdies, and then, from the 10th hole, went bogey, double bogey and bogey in successive holes. Another double bogey, on 15th hole and a solitary birdie gave him an inward nine of 41, five over par. . 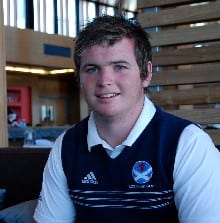 The Kenneth Gordon Davis Cup was presented to the 36 hole Qualifying winner, young Scotsman Scott Borrowman. He recorded a two under par 70 giving him a three under par 36 hole total of 141, one shot clear of the field.

Overnight leader Juan Francisco Sarasti, of Spain, finished one shot off the pace after recording a level par 72.

The top 64 players qualified to participate in the match play which commences today. The winner of the match play will be crowned the 2008 Argentine Amateur Champion on Sunday.

In the first round of the match play, Adrian Ford takes on Andrew McCabe of the US, while Derik Ferreira plays against Nicolas Ciccola of Argentina.