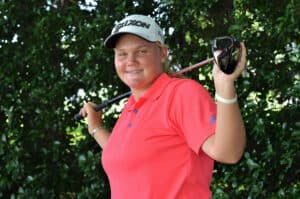 GolfRSA National Squad member Kiera Floyd will carry a two-shot lead into the final round of the SA Women’s Stroke Play Championship after carding successive rounds of 71 at the East and West Courses at Royal Johannesburg & Kensington Golf Club; credit Ernest Blignault.

Floyd fired a second consecutive round of 71, this time on the West Course, to put one hand on the biggest trophy of her career, and the 17-year-old Serengeti Estates junior will sleep on a two-stroke lead after taking pole position on 2-under-par 144.

Floyd served with Van der Westhuizen on the victorious Ekurhuleni team in 2018 and 2019 and both golfers are coached by Nicole van Pletzen at the Wanna Be A Champion Academy at Serengeti Estates.

“I really look up to her and it’s a privilege to have her as a mentor,” Floyd said.

“Her victory in the Cape Town Ladies Open really inspired me this week. She was four shots off the pace at the start of the final round, and she came from behind to win. I love her never-give-up attitude, and the way she stays in the moment and plays every hole shot-by-shot.

“To win tomorrow, I will need to stay level-headed, play my own game and shrug off any mistakes. It’s not going to come easy; I’ll have to work for it.”

Big hitting Floyd is ranked third in the open rankings and has returned to a good spell of form after a poor run of results in 2020. Last year, she racked up three wins amid seven top-three finishes in the open section. She was hunting a fourth trophy Mpumalanga Women’s Championship in November but lost out to 2020 SA Women’s Amateur finalist Kyra van Kan when the tournament was shortened to 36 holes due to inclement weather.

Floyd believes she has the game to finish in the winner’s circle, especially coming into this year’s championship back to form, but she will be keeping a close eye on provincial teammate Van Kan and Country Club Johannesburg’s Marine Legentil, who tied for second on level-par.

“I am hitting the ball well and finding a lot of fairways and greens, but the putter was a little cold in the opening round on the East. I still struggled this morning, but the putter warmed up nicely over the last nine holes, and that always builds the confidence,” said Floyd, who finished fourth, sixth and fifth in the last three years.

“I definitely expect Kyra and Marine to turn up the pressure in the final round, and they both love the West course. I play both courses well, but I prefer the East. The West Course is a bit more challenging, because it plays shorter and a lot more things come into play for me. But, if I can limit the mistakes and keep my nose in front, I have a chance.”

Bloemfontein’s Gabrielle Venter is a further stroke back on one-over, and GolfRSA No 1 Isabella van Rooyen slipped to fifth on two-over. The Clovelly golfer dropped two shots on the par-five 15th and had two further bogeys for a 75, but she still very much in the hunt, on two-over-par.

Reigning Nomads SA Girls champion Bobbi Brown fired 70 to climb to sixth spot on three-over par. The 2021 Western Province Amateur winner got off to a slow start with a bogey on the 13th and a double on the 14th but fired five birdies in the last 10 holes to vault into contention.

South Africa’s No 1-ranked junior Samantha Whateley and defending champion Megan Streicher, both at 4 over par and six off the pace, will need to go low in the final round to stand a chance of lifting the silverware.

Randpark golfer Cara Ford fired the low round of the day, a three-under 69 that boosted her to joint 10th alongside fellow Ernie Els & Fancourt Foundation member Crystal Beukes. The pair sit at seven-over. Ford

The B-Division leaderboard is a tale of teenagers.

Overnight leader Lea van der Merwe (13) strengthened her bid to win the B-Division title when she backed up an opening 82 with a round of 80. The Zwartkop junior has a six-shot cushion over Waterkloof’s Kaylee Webster (13), and she is well clear of her twin sister, Ame, who tied for third on 33-over with Lourenda Steyn (12), who plays out of Centurion.

Royal Johannesburg & Kensington’s own Tylah James rounds out the top five at 34-over. The 16-year-old has been impressive in her debut on the national circuit, shooting rounds of 93 and 85 to sit at 34-over at the 36-hole mark.