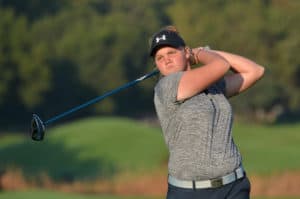 ORKNEY, 1 July 2019 – Every bit of experience gained, whether it’s good or bad, is priceless and on a blustery day at Orkney Golf Club, 14-year-old Kiera Floyd from Benoni drew on every drop of experience gained in her short career to power her way into the second round lead in the Nomads SA Girls Championship.

Fresh from boosting the GolfRSA Junior Proteas to a sixth place finish in the strong international field at the Toyota Junior Golf World Cup in Japan, the Ebotse junior stood her ground in a four-club win on Monday.

She returned a battling two-over-par 74 that shot her straight to the top on four-over 148.

“It wasn’t easy out there with the wind gusting up to 30 km per hour and it was seriously cold, but I got off to a nice start. I missed the green at 12, but nearly chipped in for eagle. The putt just lipped out, but I boxed the birdie putt,” said Floyd.

“On 13, I hit hybrid down the middle, but I blocked my pitching-wedge a bit right and couldn’t up-and-down for par. On the par five (17), I hit a good drive down the middle and my pitching wedge spun back quite a bit. The eagle putt lipped, but I made the second putt for birdie and I was really happy to turn one-under.

“The back nine was really tough. I dropped three shots and I left a lot of putts out there. After the bogey at seven, I missed a short one for birdie on eight. I hit the ninth green in two. I drove it down the middle with my hybrid and I hit a punch 5-iron in from 230 metres, but then I went and three-putted for par.

“It definitely could have been better, but I’ll take 74 on a day like this. Conditions were really tough, and with the course so dry, you battle for position. I’ll have to bring my A-game tomorrow, because the leaderboard is very tight.”

Floyd has not one, but two of her Ekurhuleni team-mates hot on her heels.

Serengeti’s Caitlyn Macnab led the field with an opening 73 and she held the outright lead through 15 holes, but the country’s top ranked amateur signed for six at the par three seventh. A second 76 will see Macnab start the final round one off the pace.

Glendower golfer Kyra van Kan, who shared the first round lead with Macnab and Symone Henriques, returned a 78 but she is still in touch at six-over.

Henriques from Glenvista golfer finished a further stroke back after carding 78, while Western Province’s Isabella van Rooyen rounds out the top five on nine-over.

Meanwhile Crystal Beukes from Boland celebrated her 10th appearance in the annual junior national event with the low round honours. The only player to post a sub-par score in the second round, the Stellenbosch golfer mixed two bogeys with a trio of birdies for a superb one-under 71 to finish six off the pace.

In the Silver Division, Tracy Humbira from Zimbabwe moved into the lead on 29-over with a brilliant 84 and her compatriot Rumbi Chisango returned an 87 to finish three shots back in second alongside first round leader Lucia Mhlabane, who stayed in touch with a 94.

Lesego Aphane from Seasons Eco Golf Estate took the first round lead in the Bronze Division. The 18-year-old North West golfer scored 39 points to lead by one point from Limpopo’s Rykie Combrink.

Maegan Webster from Gauteng North took the top spot in the Copper Division on 34 points and she will start Tuesday’s final round 10 points clear of Erin Brinkman from Eastern Province.