Congratulations to all the 2021 Champion of Champions winners!

9 November 2021 – South Africa’s No 2-ranked Kiera Floyd stormed to a sensational victory in the GolfRSA Champion of Champions tournament at Kyalami Country Club, while 2017 champion Bertie Steenkamp held his nerve to claim a second title in the Men’s A Division.

Floyd, who reeled in three provincial victories since August, followed up her opening round of 74 with a stunning second round of 69 that saw her blow away the competition to win the Women’s A-Division by 10 strokes over first round leader Bronwyn Leigh Doeg from Pretoria Country Club.

No 1-ranked Isabella van Rooyen, who plays out of Clovelly, finished in third, a further three shots back.

After lifting the trophy, the 17-year-old Ebotse club champion admitted that a change in attitude saw her come out with a fresh approach in the final round.

“Yesterday’s weather wasn’t great, and I grew a bit impatient, which really showed up in my putting. I hit 16 greens in regulation, but I got frustrated when I couldn’t sink anything,” she said. “Today I managed to stay patient and stay in the moment. I wasn’t thinking about winning, I just concentrated on each shot and I’m very happy to have come out on top.

“This is a huge win for me, because there is always such a strong field at the Champion of Champions Final. I’ve worked really hard on my game this year and I am absolutely delighted to get another big title under the belt.”

In the B Division, Mooinooi’s Madie Badenhorst claimed a narrow win over Standerton’s Patrizia Barnard, while Killarney’s Jessica Bennett claimed the honours in the C Division, winning by six points over Isabella Heber from King David Mowbray.

The Men’s A Division came down to a two-horse race between Upington’s Bertie Steenkamp, the 2017 champion, and Cole Cruickshank from Royal Cape.

Steenkamp opened with a 73 and Cruickshank – back competing on the country’s amateur circuit this year after graduating Columbus State University – was three shots adrift at the start of the final round.

The Capetonian narrowed the gap to one shot and had a chance to force a play-off when Steenkamp missed a 10-footer for birdie on the final hole. His birdie effort slid past the hole, though, and ultimately it was Steenkamp who held his nerve for a one-shot win at +5. 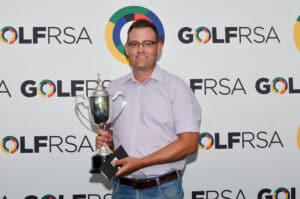 “It was tough out there today. I was pulling the ball left all day, so that put pressure on my short game, and I needed to chip and putt well today,” Steenkamp commented after registering a final round 76.

“I am extremely proud to have my name on that trophy again. When you think about having to win your Club Champs, then the regional final and then to beat a seriously strong field of players in the final, it is a real honour to be standing here as the Club Champion of Champions. I really hope I get to shoot for the hat-trick next year.”

In the B Division, Schoeman Park’s Tokkie van der Westhuizen came from eight strokes back to beat overnight leader Glen Wynne from Polokwane, while Steenberg’s Jürgen Erhart claimed the C Division on 69 points, winning by one stroke over Koro Kreek’s Ernest du Plessis.

GolfRSA CEO Grant Hepburn was pleased to be able to run a full series of events after having to cancel the 2020 tournament due to COVID-19.

“The 2021 GolfRSA Club Champion of Champions event has been a great success,” he said. “I’m sure a lot of people will focus on the winners of the A Division, but I want to congratulate the winners across all six divisions.

“The majority of golf across the world is not played by the elite players, but by golfers across a wide spectrum of handicaps and we want to celebrate the Club Champions across every division.

“My thanks must go to Paul Adams for the running the tournament so successfully and to the team at Kyalami for putting on a tremendous event.” 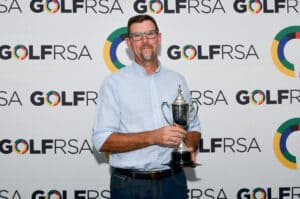