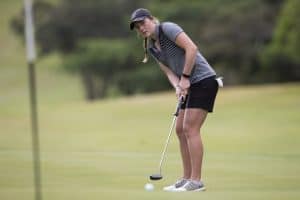 The 22-year-old from Maritzburg returned rounds of 73 and 70 to claim the top spot on one-over 143. Fletcher held her nerve over the closing holes and birdied the par three 18th to edge out reigning Sanlam South African Women’s Stroke Play champion Casandra Hall from Ekurhuleni and Gauteng junior Kaiyuree Moodley by one shot.

She will lead the field into the match play stage, scheduled from Monday to Wednesday.

The KwaZulu-Natal number is in her fifth year at the University of Memphis, where she majoring in Marketing and Supply Chain Management. Home on her summer break, Fletcher has taken very little time off, choosing instead to work on her game.

Considered one of the strongest match play contenders on the local circuit, the KwaZulu-Natal golfer was three behind Moodley after the first round. She still lagged two shots off the pace at the turn, but she played the back nine in five under to win.

Fletcher hit three-wood off the tee at the par five 10th, leaving herself just 55 metres to the pin. She pitched just short of the hole and watched the ball roll up and drop into the cup.

“I’ve been practicing chip shots and the moment I hit my second shot, I knew it was going in. The shot came out exactly as I intended,” she said.

“I two-putted for birdie at 13 and hit a gap-wedge to six foot at 16 and boxed a real slider. I went with a 6-iron off the tee at 18. I knew I needed a birdie finish, so I got a bit more aggressive. It pitched 10 foot from the hole and I made another big swinging putt.”

Fletcher also won the seeding at Ebotse Golf Links in 2016, but she was knocked out in the third round.

“I’m definitely more experienced than I was at Ebotse,” she said. “This golf course keeps you on your toes and that’s where college golf helps. You’re playing very competitive golf week in, week out, which means you constantly have to be at your best.

“You can’t play percentage golf – fairways and greens – because par is often not good enough. Most times you have to fire at pins. That gives you that competitive edge.

“Stroke Play and Match Play are vastly different formats. I get way more aggressive in stroke play, whereas timing is everything in match play. You have to hold back a bit, try to take advantage of your birdie holes and put pressure on your opponent. Play the course, not the player.”

Seventeen-year-old Moodley from Bryanston Country Club led the field through 27 holes, but she gave Fletcher and Hall a foothold with three bogeys on the bounce from the 10th. The former Nomads SA Girls Rose Bowl champion dropped further shots at 15 and 18. She signed for a 75 to finish alongside Hall, who returned rounds of 75 and 70, in second place.

Defending champion Cara Gorlei from Western Province comfortably advanced to the match play stage. The Arkansas University student posted rounds of 76 and 79 to ninth on her own.