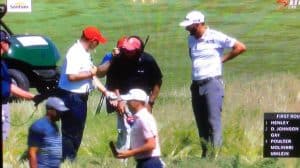 GolfRSA’s Neil Homann in action with world number one Dustin Johnson during round one of the US Open at Shinnecock Hills.

15 June 2018 – World number one Dustin Johnson averted a huge mess on number six at Shinnecock Hills on Thursday at the U.S. Open thanks to an unlucky bounce, but he had Sky Sports to thank for finding his ball in the rough at the US Open.

He even earned a free drop when Sky Sports commentator Rich Beem stepped on it!

Johnson got off to an excellent start in tough scoring conditions on the opening day, with birdies at the fourth and fifth taking him into a share of the lead. But disaster struck when the 2016 champion pulled his drive too far left, his ball bounding into the thick rescue and out of sight.

The ball landed somewhere in the fescue rough.

And while the entire world may have been watching and looking for his ball, it was not easy to find. GolfRSA’s Neil Homann, making his Major debut as a rule official, minded the clock as even Johnston’s playing partner Tiger Woods joined the search that also included USGA officials and 20 spectators.

With time ticking away, Beem accidently found Johnson’s ball when he stepped on it. Because nobody in the search party had an idea of what the lie was, the American was granted a free drop which looked a lot more favourable.

The search was entertaining and watching our own Homey was priceless!!