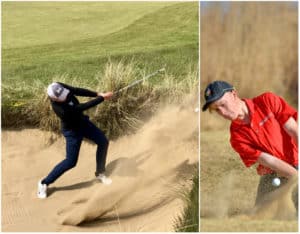 Dawson moved to eight under with two-under-par 69 in round three. The Tramore golfer leads by six from England’s Alex Fitzpatrick and is 10 shots clear of the next best golfer is Irishman Alex Gleeson.

English pair John Gough and Todd Clements at three over and five over respectively, while Woollam from KwaZulu-Natal will start the last round tied for sixth at six over.

The Sanlam SA Amateur finalist mixed birdies at one, nine and 12 with six bogeys and a double at the par four eighth. “I had a really rough day in the wind,” said the Durban Country Club amateur.

“I had a tough time finding any rhythm and struggled with a string of bogeys early on. I struck it better going down the back nine and I began to pull the round together, but unfortunately my putting stroke deserted me at the last couple of holes. I gave unnecessary shots back at 16 and 17. Overall not my best day, but I was pleased to stay in the mix.”

Young Schaper from Ebotse Links in Ekurhuleni had the measure of the wind, though.

The only South African to dip below par in the third round, the country’s top ranked junior carded a one-under 70 and rocketed to a tie for 12th on seven-over 220.

It was a brave effort from the 16-year-old, who was outside the projected cut at six-over after rounds of 73 and 77. “I wasn’t too happy with my putting after the first two rounds and I put some work in and it showed,” Schaper said. “I made four great putts to save for par and played the front nine flawless to keep myself in the tournament.”

Schaper hit a 4-iron down the middle at six and eight-iron in for his second that landed eight foot from the pin. He holed the putt for birdie to turn one-under.

“I made solid pars up until the 11th hole, where I hit a pretty good second shot, but I got unlucky and ended up having to sink a seven-footer to save for bogey. But I bounced back with a nice birdie on 12 and made pars all the way to the finish.

“I love this style of golf where anything can happen, but I have to say, the conditions were brutal. It felt great to post a sub-par round to get myself back into the tournament. I just kept the ball in play off the tee and I didn’t worry about distance. Having the putter hot also helped a lot. I hope to finish off tomorrow with another strong performance.”

Matt Saulez dropped a shot at the closing hole for a 77 and joined Schaper at seven over.

Fellow GolfRSA National Squad members Christo Lamprecht, Clayton Mansfield, Therion Nel, Malcolm Mitchell and Deon Germishuys all advanced to the final round, but Wilco Nienaber three-putted the final hole for a 73 to come up one agonising shot shy of the mark set at 13 over.

Lamprecht from Southern Cape and Mansfield from KwaZulu-Natal returned respective rounds of 78 and 75 tie for 26th on nine under.

“I got off to a slow start; I three-putted the first for bogey and had a soft drop on four when I didn’t get up and down,” said Mansfield. “I made a great birdie on nine after making doubles there in the last two rounds and another at 12, but I gave shots back at 15 and 17 for a 75.

“The conditions were the worst of the week and I fought hard to hold the round together, which I was very pleased about. I am honestly enjoying this experience. The course is so difficult, but it’s a great test of patience and skill.”

Free State amateur Therion Nel had a nightmare start to his second round with a nine at the par-five first and was in danger of an early exit after posting an 80, but the reigning Northern Cape amateur made a great recovery with a superb 72 on the third day to tie for 32nd on 10 over.