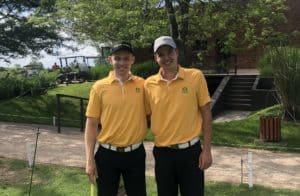 The 17-year-old Argentine junior tops the leaderboard in the world’s sixth oldest Amateur championship on seven-under after carding rounds of 70 and 67.

Filippi enjoyed a great putting day in the first round and opened with a three-under-par 69 to grab a share of fourth. The GolfRSA National Squad member battled with the flat-stick, but a 71 on Thursday was still good enough for the Milnerton golfer to retain a share of fourth.

“It was boiling hot today and we teed off in a 3-club wind. I played great from tee to green, but it was an average day on the greens. I had 33 putts, which was really frustrating,” Filippi said.

“It was just a pity that I couldn’t hole the three and four metre putts, because then the score would reflect the kind of golf I played. I hit everything inside four metres over the first six holes on the front nine, but couldn’t hole a putt. I had a three-putt on the par three seventh, but pulled it back with birdies on 11 and 14 and I also cancelled a bogey on the 15 with a birdie finish.

“It is really frustrating when you are doing everything right and the putter won’t cooperate, but I’m staying positive. I’m just a few shots off the pace, and I’ve done some work with the putter, so hopefully it all comes together in the third round.”

The Eastern Province golfer carded 76 in the first round and managed to pull it back on day two after a mid-round stumble to sign for 75. “I had a good time on the course on day one, but I just didn’t have the golf,” said the Port Elizabeth golfer. “Today I started off really nicely for the first time on this trip to Argentina and I was level through seven.

“Then I think I just fell asleep. From the eighth to the 12th I dropped six shots in five holes. Just a combination of silly shots and badly executed shots. It was a serious shocker, but then I got my head back in the game and made four birdies on the way home. “Unfortunately I had one more bogey on the 15th.

“It wasn’t my finest day, but I took a lot of confidence out of the way I managed to bring it back to three-over. I still had a lot of fun out there and it was really nice to have a little comeback and work hard for a score, especially in the conditions. I am feeling good going into the third round. It was good to see for myself that I can show a bit of fight and get the birdies when I need them.”

The cut fell at 12-over, with 61 players progressing to the final two rounds.