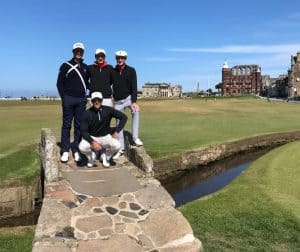 Luca Filippi (middle back) with Chris Woollam, Malcolm Mitchell and Clayton Mansfield on the Swilken Bridge at St Andrews

9 June 2018 – Just a few days after he joined the GolfRSA National Squad on the annual UK Tour, Western Province amateur Luca Filippi fired himself into early contention at the St Andrews Links Trophy in Scotland.

With next to no rain in the area for nearly two months, the New Course at St Andrews played hard and firm and only 26 players in the 144-strong starting line-up broke par on Friday.

Filippi racked up four birdies to offset a lone bogey for a three-under-par 68. The 2017 Junior Presidents Cup player tied for second and he will start today’s second round at the Old Course just one behind from Englishman Olly Huggins.

“I birdied three and four to get off to a good start,” said the 19-year-old Ernie Els and Fancourt Foundation member.

“I made a really great par at the tough fifth, but I gave a shot back at six. Then I just parred my way through the turn and picked up my last birdie at 14. I holed four-metre putts at 15 at 16 to up-and-down for par to keep the round going, but it was hard and fast out there.

“It was really difficult to judge how far the ball would go. The greens were incredibly firm and the flags were also in tough spots. It was really tricky to get the ball in the hole.

“I am reasonably happy with how it went, although you always think about the shots you left out there. I was pretty consistent and I kept the mistakes to a minimum, which is always good. Just hoping for the same tomorrow.” 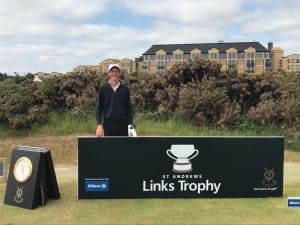 Southern Cape teen Christo Lamprecht was the only other GolfRSA National Squad player to finish in red numbers.

Coming off his wire-to-wire victory in the East of Ireland Amateur Open at County Louth last Sunday, the 17-year-old Louis Oosthuizen Junior Academy member from George returned a one-under 71 to grab a share of 15th.

Matt Saulez from KwaZulu-Natal, who tied for seventh in the Irish Amateur, was next-best in the South African challenge. The Durban Country Club golfer carded a one-over 72 to join a bus of 20 players in joint 47th.

With cut set to fall at 40 and ties at the end of the day, the rest of the local line-up will need to go low at the Old Course.