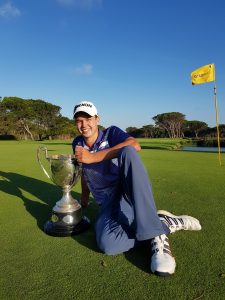 18 February 2019 – Luca Filippi issued a stern warning to his contemporaries with a perfectly struck 5-iron at the final hole and two-putts for victory in the 36-hole qualifier of the South African Amateur Championship on Monday.

The overnight leader fired a one-under-par 71 at King David Mowbray Golf Club to lift the prestigious Proudfoot Trophy by one shot on a winning score of 10-under 134.

Stals Swart made the most of the benign morning conditions and fired a 65 to set the clubhouse target at nine-under. The Pretoria Country Club golfer had to settle for second alongside Irishman Caolan Rafferty, who carded 66 for second.

Filippi open his campaign with a nine-under-par 63, however the stiff breeze on Sunday morning was nothing compared to the four-club wind the 19-year-old GolfRSA National Squad player had to face over the last nine holes in the final round.

“I had a late start and the wind was already blowing hard when we teed off,” said Filippi. “I got off with a good par, but at the second, I pitched it front edge and hit my putt 10 metres past. I missed the return for par, but I rebounded with a good birdie at the third after hitting my lob-wedge stiff.”

The Milnerton golfer birdied six, dropped nine, but a regained a one-shot lead with birdie at 11.

“I dropped another shot at 14 after almost hitting my drive into someone’s backyard and I knew I needed one more birdie down the stretch to get back to 10-under,” said the Ernie Els and Fancourt Foundation player.

“I hit a driver down the middle at 15. The wind was pumping off the left. We were at a four-club wind by this stage and I went with an 8-iron. I pitched it 10 feet from the flag and drained birdie putt. The last three holes were going to be really tough in the wind, and that gave me a really small cushion.

“I hit a long bunker shot to eight foot at 16 and boxed the par putt and had two putts for par at 17. At the last hole, I hit another great drive down the fairway, but I was between a 4- or 5-iron. I went with the 5-iron and I thinned it slightly, but it held the line perfectly and pitched 12 foot from the flag.

“I rushed my first putt and hit it four foot past, so I took my time with the second putt. This time it went in the middle and dropped. That was the greatest feeling.”

Filippi was delighted to add his name to past winners’ list, but quickly turned to matters at hand.

“It’s a real honour to win this trophy,” he said. “I’ve been working hard in the last year to take my game to the next level and being part of the GolfRSA National Squad Tour to the United Kingdom really helped to give me insight into what I needed to do.

“The work started to pay off when Therion (Nel) and I represented South Africa in Argentina, and it’s gratifying to see the results pay off with the Proudfoot Trophy. But the real work starts now. Nothing is guaranteed in match play. A guy can win with 18 pars or lose with 10 birdies.

“So I’ll start the first round on Tuesday with a clean slate. I’ll might play a little more aggressively to get some birdies on my card, but again, that depends on the kind of conditions we face. If it blows like today, the key will be patience and taking the opportunities where and when they come.”

England’s Joe Long shot a 67 to tie for eighth with Gaelen Trew from Wales on 138, while a 65 landed Liam Cloete a share of 10th with last year’s Proudfoot Trophy winner David Langley from England.

Eight players did battle for the last five spots to complete the field of 64 that will start the match play stage. The spoils went to Ayden Senger, Kyran Hawkins, Germany’s Sebastian Sliwka, Tiarnan McLarnon from Ireland and Antoine Sale from Reunion, who will battle Filippi in the first round.