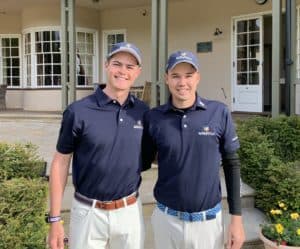 LEEDS, England (1 June 2019) – Luca Filippi made huge strides on moving day in the English Men’s Open Amateur Championship to join the chase for the Brabazon Trophy with one round left at the Alwoodley Golf Club.

The GolfRSA National Squad member fired a five-under-par 66 to surge upwards and finish seventh on his own on three-under in Saturday’s third round.

The Western Province will start the final round nine shots behind overnight leader Ben Schmidt, who clung to pole position on 11-under with a 69. The Englishman has a one shot lead over compatriot Harry Hall.

Filippi reeled in birdies at three, five, seven and eight to turn four-under.

The Western Province golfer cancelled a dropped shot at the par four 12th with a birdie at 13, and overturned his second bogey at 14 with a brace of gains at 15 and 16.

“I got off to a really good start,” said Filippi. “The putter was ice cold the first two days, but it warmed up nicely early on and I got it to four-under through nine. I went bogey, birdie, bogey birdie down the back nine, but I finished strongly to go three under for the tournament.

“I left the driver in the bag on most of the holes and went with irons off the tees today and that worked out well for me. But the putter was definitely key to a better scoring round. I holed two good putts for the birdies at 15 and 16 were good and rolled in another two good putts for pars at 17 and 18. I’m really pleased with where I’m sitting right now with 18 holes to go.”

The Port Elizabeth golfer reeled in birdies at three, eight, 10, 11 and 14 to dip five under par before he dropped his only shot of the day at the par four 15th.  He closed with a trio of pars for a four-under 67 to crack the top 20.

“I played really nicely today; just had one silly mistake, but otherwise it was just solid golf,” said De Beer.

“I struggled a little to adjust to the conditions over the first two days, so really happy that I’ve adjusted to the cold and could put together a low one. Travelling on your own is tough, too, and I have to say thanks to the GolfRSA quartet and the tour manager David Younge for taking me under their wing and helping me ease into the conditions over here.

“The golf course is beautiful, but it’s a real test. It’s got a nice balance of easy holes to start with some birdie opportunities and then a really tough closing stretch.”

Wilco Nienaber, who made the cut alongside Filippi and De Beer, carded two-over par 73 to finish in a tie for 44th on four-over.