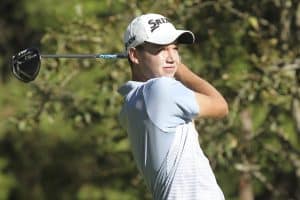 17 February 2019 – Western Province trio Luca Filippi, Elton James and Deon Germishuys made their presence felt at King David Mowbray Golf Club in the first round of the 36-hole qualifier for the Sanlam South African Amateur Championship on Sunday.

On a day when windy conditions tested their patience, only 25 players in the 145-starting line-up managed to break par.

Filippi’s nine-under-par 63 held up for the first round lead, with Westlake stalwart Elton James finishing second and defending champion Deon Germishuys grabbing a share of the five-way tie for third.

Teeing off in a stiff two-club wind in the morning, Filippi racked up three birdies and eagled the par five 14th in his outward loop. The 19-year-old GolfRSA National Squad picked up four more gains coming home to present a flawless card.

“I started with two solid pars, but the greens were a little slower than Leopard Creek last week and I left a four-footer for birdie just short at 12,” said South Africa’s number four ranked amateur. “They run true and hold the line well, though, so I told myself to go for the putts; shoot them firm and straight and that worked out well.

“I made a great up-and-down for par at 18 to turn five-under, and made three solid pars to start the back nine. I hit a 4-iron into the short hole (fourth) and holed a 25-footer for birdie to keep the round ticking over.

“I drained another long putt at five, about 20 foot, for birdie and made a good up-and-down for birdie at six, so a nice little run in the middle of the back nine. It was crucial with the wind to hit fairways and greens and I didn’t miss a fairway all day. And for once, the flat-stick was hot. I made lots of putts, which is always nice at the start of a tournament because it sets you up for the next round.”

James from Westlake rallied with four birdies and an eagle three at the ninth around the turn. He added a further gain at 14 and parred his way home to a six-under 66.

Germishuys knocked out local favourite Christ Woollam at Durban Country Club at the 40th hole to lift the prestigious title and made a case for successive victories with a bogey-free start. The Ernie Els and Fancourt Foundation member had a brace of birdies at 14 and 16 and dipped four shots under par with an eagle at the par five 10th.

Siyanda Mwandla from KwaZulu-Natal, a former graduate of the South African Golf Development Board, made it a trio of Ernie Els and Fancourt Foundation members in the top four when he fired six birdies for a 68.

The log-jam at four-under also features reigning Australian Amateur champion Conor Purcell from Ireland and his compatriot James Sugrue, as well as the familiar face of Englishman David Langley.

Last year, David Langley upstaged the local challengers to lift the Proudfoot Trophy when he won the 36-hole qualifier by four shots in extremely windy conditions at Durban Country Club.

A member of the English team that overhauled the GolfRSA Juniors to win the Team Competition in the African Amateur Stroke Play Championship at Leopard Creek last week, the Castle Royle golfer is back in the mix at four-under.

Sam Simpson from Bellville Golf Club, the low scorer for the GolfRSA Juniors in the final round of the team event, carded a three-under 69 to tie for eighth with compatriot Aneurin Gounden, Scotsman James Wilson, Gaelen Trew from Wales and Coalan Rafferty from Ireland.