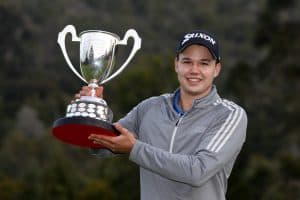 Luca Filippi clinched his second provincial title of the season with a four-shot victory in the Southern Cape Open, supported by the Western Cape Department of Sport, at Plettenberg Bay Country Club; credit Pieter Els.

21 August 2018 – Luca Filippi is finally having the kind of season he knew he was capable of and victory at Plettenberg Bay Country Club on Sunday validated his simple, but effective objective for 2018.

“I had some great highlights, but last year still felt like a let-down in terms of the rankings. I decided not to put pressure on myself this year. I set myself just one goal this season to get into the top five of the Open Amateur Rankings and just went out there and played,” he said.

The Western Province golfer carded rounds of 70 and 68 to hit the front in the Southern Cape Open, supported by the Western Cape Department of Sport.

He held on to the lead with a third round 72 and fired a final round 69 to win by four shots from fellow GolfRSA National Squad member Ayden Senger on nine-under 279.

Regarded as one of South Africa’s brightest golfing prospects, the former top ranked junior made a smooth transition to the Open Amateur circuit in 2016, but a limited schedule last year saw him slip in the Open Amateur rankings.
“I had to put golf on the back burner last year to focus on matric,” said the Milnerton High School graduate. “I posted some good results, I earned a spot on the International Team in the first Junior Presidents Cup, but it was a frustrating season. I came out guns blazing this year, but I didn’t exactly set the world on fire.”

He made a stuttering start to the season, but he has enjoyed a great run of form since April.

The Milnerton golfer followed runner-up finishes in the Western Province Stroke Play and Match Play with a joint victory in the KwaZulu-Natal Stroke Play in May. A tie for second in the Border Stroke Play in July preceded his success in the Southern Cape Open, which boosted Filippi to fourth in the Open Amateur rankings.

“When I just started playing golf, I was coached by Teddy Webber,” said Filippi. “Five months ago, I decided to go back to playing feel golf and I went back to Teddy at Atlantic Beach. I’ve never been a long hitter, but getting my feel back got me competitive again.

“I beat the field at Plettenberg Bay with accuracy and a solid short game. I missed very few fairways and whenever the putter ran cold, the short and irons and wedges turned hot. It’s like every part of game is working together again.”

Filippi was one of only three GolfRSA National Squad players to make the cut in the St Andrews Links Trophy and reach the third round of the match play stage in the Amateur Championship.

“The GolfRSA National Squad Tour played another vital role in my success lately,” he said. “I gained a lot of confidence at the St Andrews Links Trophy. It was the first time I played at St Andrews. “Although I grew up on links golf at Milnerton, nothing prepared me for the hard fairways and greens and the wind at the Scottish links. Royal Aberdeen and the Murcar Links was an eye opener. I learned so much about shaping shots and keeping it in play. I used that experience in the Border Stroke Play and the Southern Cape Open, even though they are not links courses.

“The more you play on Links Courses, the more shots you have in the bag. Those courses force you to become creative and to imagine different kinds of shots. Above everything, I hope to stay in the top five so I can have a shot at another tour to the UK next year.”

Filippi is one of five members of the Ernie Els and Fancourt Foundation (EEFF) to succeed on the national amateur circuit this season.

“I think we will have even more winners this season,” Filippi said.

“It took some years of trial and error, but in my view, the EEFF has perfected their programme. The structure around our programmes, statistics and preparation is really solid. We stay and work at home where our families and coaches can give us the best support and we play stress-free golf with Oom Hannes (Van Niekerk) taking care of all the logistics.

“Together with the EEFF, we get awesome support from GolfRSA. We have really well organised tournaments on the circuit like the Southern Cape Open. We are given every opportunity to reach our potential and it’s up to us to put in the work to produce results.”