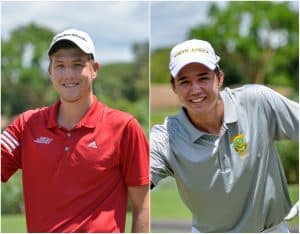 Luca Filippi from Western Province and Therion Nel from Free State will be representing South Africa in the Juan Carlos Tailhade Cup and the Argentine Amateur Championship in Argentina this November; credit Ernest Blignault.

Nel from Free State and Filippi from Western Province will travel to Buenos Aires on 29 October and spend two days preparing to extend the country’s fine record in the Juan Carlos Tailhade Cup at Los Lagartos Country Club from 1-4 November.

The high-rated Juan Carlos Tailhade Cup comprises a team event and an Individual Competition and South Africa has a proud history, with two victories and a string of top five finishes over the past eight years.

In 2011, Jared Harvey and Graham van der Merwe rallied for a third place finish and Drikus Bruyns partnered CJ du Plessis to joint fourth in 2012. Gerlou Roux and Callum Mowat finished fifth in 2014, as did Tristen Strydom and Teaghan Gauche a year later.

Following the prestigious international Teams Tournament, it’s each man for himself in the 123rd Argentine Amateur Championship. The world’s sixth-oldest amateur championships will be staged at Highland Park Golf Club from 7-11 November.

South African Golf Association President Geoff Taylor is confident that Filippi and Nel are up to the challenge ahead.

“Therion and Luca have both performed incredibly well this season with multiple victories at home and both players excelled during the mid-year GolfRSA National Squad Tour to the United Kingdom and Ireland,” said Taylor.

“Therion made the cut in all of the four events he contested and so did Luca in his two starts. They both reached the match play stage in The Amateur Championship, with Therion going through to the third round and Luca reaching the top 16.

“They are both deserving of their national colours and we are pleased to offer them the chance to gain further experience against top-ranked amateurs from all over the world.”

Filippi has risen to fourth in the Open Amateur rankings this season. In his last six starts, he won the Southern Cape Open, shared victory in the KwaZulu-Natal Stroke Play Championship and enjoyed runner-up finishes in the Western Province Stroke Play and Match Play Championships and the Border Amateur Stroke Play. 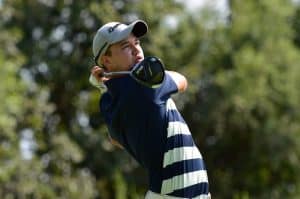 Luca Filippi from Western Province will be representing South Africa in the Juan Carlos Tailhade Cup and the Argentine Amateur Championship in Argentina this November; credit Ernest Blignault.

“I am really grateful to GolfRSA, the South African Golf Association and the Ernie Els and Fancourt Foundation for another opportunity to test myself abroad,” said the 19-year-old Milnerton golfer.

“This trip will be even more of a learning curve as Therion and I are travelling on our own without a manager to a country where we have never competed before. It’s very exciting. I think the biggest challenges for us will be the language barrier with the families that we will be staying with and the heat, with temperatures in the high thirties. Hopefully we adjust quickly. We are both super excited to represent South Africa and hopefully win the Team Competition.”

Ernie Els and Fancourt Foundation stablemate Nel is the only amateur with a hat-trick of victories to his name this season. The 20-year-old collected trophies in the Northern Cape Open, Limpopo Open and Border Stroke Play and surged to fifth in the Open Amateur rankings. 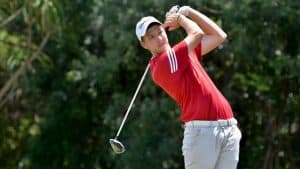 Therion Nel from Free State will be representing South Africa in the Juan Carlos Tailhade Cup and the Argentine Amateur Championship in Argentina this November; credit Ernest Blignault.

“Every athlete dreams of representing his country and I feel very privileged to have been given the honour of wearing the green and gold in Argentina,” said Nel.

“Luca and I have known each other for nearly 10 years and we have become good friends through the Foundation over the last two years. We had a great time on the GolfRSA National Squad Tour and I think we will be a good combination in Argentina.

“We’ve chatted to Matt and Malcolm about their trip last year. They both enjoyed it immensely. They said the courses are similar to what we know here in South Africa, but the heat is extreme, so we will need to be prepared for hot days. We are just going to take it one day at a time and play to our strengths and hopefully that leads to victory in Argentina.”

“You really cannot put a price on the value or the impact of international competition and these two events represent a fantastic opportunity for two of the rising stars from our GolfRSA National Squad to further their golfing careers,” said GolfRSA CEO Grant Hepburn. “We are extremely pleased to offer Luca and Therion this opportunity and we wish them well during their campaign in Argentina.”