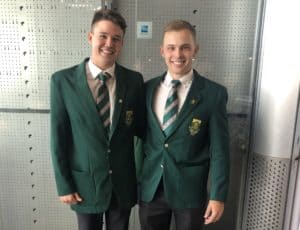 Since Ryan Dreyer partnered JG Claasen to a second victory in 2009, South Africa has enjoyed a string of top five finishes, including last year when Filippi flew the flag for South Africa with Therion Nel from Free State.

The GolfRSA National Squad pair is determined to do the country proud again in the highly-rated 72-hole event at the Los Lagartos Country Club in Pilar from 31 October.

“I’m really grateful to have another stab at the title with Kyle,” said Filippi.

“We are going up against a very strong field of local and international golfers, but I believe we can hold our own with the experience we both gained over the last year competing against top international amateurs. I was also disappointed last year when I slipped out of the top 10 in the final round, so it’s great to have a chance to make amends.”

Following the Juan Carlos Tailhade Cup, it will be each man for himself as action moves to the Estancias Country Club for the 72-hole Argentine Stroke Play Championship.

Filippi has represented South Africa on the global stage since his early junior days, but De Beer is no stranger to international competition. The Nelson Mandela University student led the scoring for the SA University Sport teams in the 2017 Summer Universiade in Taiwan and 2018 FISU World University Golf Championship in the Philippines.

Earlier this month, De Beer made a spectacular debut for the GolfRSA Protea Team in the All Africa Golf Team Championship, where his contribution helped South Africa to a 46-shot victory at Mont Choisy Le Golf in Mauritius. Now he hopes to partner his Ernie Els and Fancourt Foundation stablemate to a strong start to build on.

“We arrived on Monday night and headed straight to the golf course for their first practice round on Tuesday morning,” said De Beer from Port Elizabeth. “We are hoping to play two practice rounds to put together a strong game plan for the course. As it’s heavily tree-lined, positioning off the tees will be crucial to give ourselves scoring opportunities.”

“Like last year, the intense heat and the language barrier is bound to pose some problems, but we’ll conquer those with enough fluids and Google Translate,” said Milnerton’s Filippi. “It’s important for us to repay the trust that GolfRSA and the South African Golf Association have placed in us and we know we need to start strong to give ourselves a chance. We are super excited to put on the green and gold in the first round and fly the flag for South Africa.”