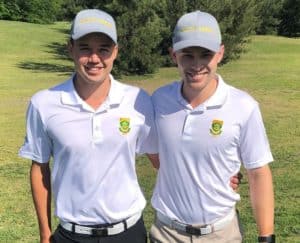 “We are pretty stoked that we managed top 20 individual finishes in both events,” said GolfRSA National Squad member Filippi.

“I battled the putter and Kyle struggled with his swing, so it really was frustrating at times, but we are both really pleased that we produced shots that counted when it mattered.

“I was tied for fourth after 69 and 71, but I went into reverse over the last two rounds and ended up tying for 18th on three-over. You can guess what happened … the ball striking was really superb, but putter completely deserted me.

“I had 33 putts on both days, which just killed my chances. In the third round, I had a couple of three-putts and made two big numbers for a 76. Then I started the final round with two three-putts in the first four holes. I was so pleased that birdied three of the six holes on the last day for a 75.

“The Estancias course was very different to Los Lagartos. It’s very tight around the greens and the fairways are tight too. We also had a lot more wind to contend with and this course has Bermuda grass. We were getting some big fliers out of the fairways.

“Still, irrespective of the struggles we had, Kyle and I had a really great time and we are grateful to GolfRSA and the South African Golf Association for giving us this opportunity. We met a lot of people and got emerged in the culture and we are taking a lot of positives out of this experience.”

Ernie Els and Fancourt Foundation stablemate De Beer got off to a stumbling start with rounds of 76 and 75, but rallied with 70 and 71 in the final two rounds to finish on four-over.

“It was really nice to post to sub-par rounds after I struggled to put a decent score on the board over the first two days,” said the Eastern Province golfer.

“It felt really good when I made a nice little 10-footer on the last for birdie to finish under-par. I hit the ball the best I’ve done in the two weeks in Argentina. I absolutely striped it out there, but the pins were tucked in tight spots and I still struggled to read these greens. I had a lot of near-misses.

“Judging swirling wind again was tough. I was made to look quite stupid quite a few times from the middle of the fairway with a wedge in my hand. A couple of them finished way short or flew well over the greens. I just misjudged a few wedges, but that was really the only downside of the day.

“It’s been a really fantastic experience. The two events drew a big international field with many countries sending their top guys, so the competitive aspect was great. The Argentine people were exceptionally welcoming and their hospitality was top notch. We are indebted to GolfRSA and the South African Golf Association for giving us this great exposure to further our careers.”

David Ravetto became the first French champion since the Argentine Amateur Stroke Play Championship started in 1957 when he captured the title by three strokes. The Frenchman fired rounds of 69, 69, 70 and 66 for a 72-hole aggregate of 13-under-par 274.