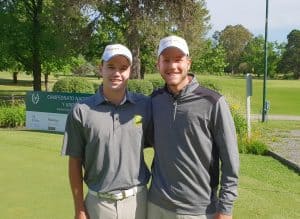 BUENOS AIRES, Argentina (8 November 2018) – He liked the look of the course in the practice round and predicted a good week and that’s just how Luca Filippi started the Argentine Amateur at Highlands Park Country Club in Buenos Aires on Thursday.

South Africa’s number four ranked Filippi fired four birdies for opening three-under 69 and a share of second behind pacesetter Jorge Maicas from Spain, who set the clubhouse target at five-under.

“I was disappointed with my finish at Los Lagartos, because the game was there and I hoped to do better this week,” said the Milnerton golfer.

Filippi and fellow GolfRSA National Squad member Therion Nel placed fifth in the International Team Competition in the 47th Juan Carlos Tailhade Cup, but a final round 72 saw Filippi drop out of the to 10 in the Individual Competition.

“This course is shorter with a lot of dog-legs and you’re hitting 3-iron off the tee at most of the holes. If you manage yourself off the tees and position yourself well, there’s a low score out there. I hit the ball the ball great again, but the putter was lukewarm. Three-under was a good start, but it could have been lower.

“I birdied the fifth, a par five, and holed a lengthy birdie putt at nine to turn two-under, but I gave a shot back at 12 when I short-sided myself at the short hole. I birdied the 14th, another par five, and hit it close at 16 to tap in for birdie. I missed a six-foot uphill put at the last, but I did some work with the putter post-round and hopefully I can get it going today.”

Nel from Bloemfontein also had a solid first day, but one bad hole that cost him three shots and he signed for a three-over 75.

“I played really decent, but that triple at eight was expensive,” said South Africa’s number five ranked amateur. “I was four-over after nine and brought it back to two-over with birdies at 10 and 11, but let another one slip at 17.

“I hit the tee shot straight down the middle on eight into the wind, but I hit my second in the greenside bunker. The sand is very thin on the sides of the bunkers, and I thinned my trap shot over the green. I chipped on and three-putted. It was annoying, because I was putting really well up to then.

“At 10, I was on for two and two-putted for birdie and I hit my approach to three foot on 12 and holed the birdie putt. From there it was steady golf. The 17th is a dog-leg left par four and you have to hit a draw off the tee, but I overcooked the tee shot and finished in the trees.

“I punched out to the fairway, hit my second in the greenside bunker. I had a similar lie as on eight and the trap shot ran out too far and I couldn’t make the return. I like course and I’m playing nicely, so I’m certain I can go much lower. Just need to stay clear of the bunkers.”