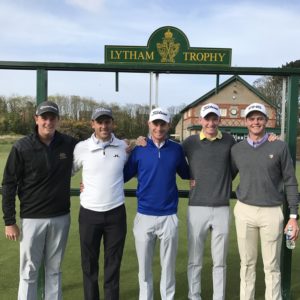 3 May 2018 – GolfRSA has announced a team of GolfRSA National Squad members for its third annual tour to the United Kingdom this June.

The group will participate in various top-ranked international tournaments over a four-week stretch, including the Irish Amateur, English Men’s Stroke Play and The Amateur, as well as the St Andrews Links Trophy.

In-form Wilco Nienaber will get an early taste of the conditions in England when he spearheads a group of five South Africans competing in the Lytham Trophy starting on Friday.

The 18-year-old Free State golfer cemented his number one spot in the Open Amateur rankings when he became the first double winner of the Western Province Amateur Championship since 2012 at Milnerton Golf Club last Sunday.

The five players will join up with – 2018 Northern Cape champion Therion Nel, Christo Lamprecht and South Africa’s top-ranked junior Jayden Schaper – in Newcastle for the official start of the United Kingdom Tour at the Irish Amateur at Royal Country Down from 17-20 May.

The squad will also visit Carton House, the host venue of the World Amateur Team Championship from 29 August to 8 September. GolfRSA Operations manager Eden Thompson and TuksGolf Head Strength and Fitness specialist Gavin Groves will manage the players during the Irish leg of the tour.

Following the Irish Amateur the squad will split.

Nel, Lamprecht, Schaper and Mansfield head to County Louth, where they will play in the East of Ireland Championship from 1-4 June. They will be looked after by GolfRSA Golf Operations, Rules and Training Neil Homann.

Germishuys, who won the Sanlam SA Amateur, the Nomads SA Boys U-19 Stroke Play and the Bridge Fund Managers Junior Series South Final this season, and Thompson depart for Japan to join the SA Junior Team for the Junior Golf World Cup.

The two groups merge in Scotland for the Links Trophy at St Andrews from 8-10 June and the Amateur Championship at Royal Aberdeen and Murcar Links from 18-23 June.

The South African challenge will be further bolstered by two former number one amateurs, Garrick Higgo and Jovan Rebula, who are both attending universities in the United States, as well as Western Province Stroke Play runner-up and Match Play finalist Luca Filippi.

KeNako Academy head coach Roger Wessels will join the squad for the two events in Scotland to assist with on-course skills and course management.

“We are also hoping that we can organise a midweek friendly against members of the Scottish Golf National Squad as part of their preparation for the Amateur Championship,” said GolfRSA CEO Grant Hepburn.

“This is the third year that GolfRSA is hosting a United Kingdom Tour since the GolfRSA National Squad was launched in 2016 with a sizeable donation from our chairman Johann Rupert.

“The funding enables us to offer our top talents the chance to compete abroad and gain experience in some of the most esteemed championships on the global amateur golf schedule.

“Exposing our players to strong international fields and conditions that are vastly different to what they are used to back home is hugely beneficial to their development. The experience broadens their field of expertise, gives them a realistic sense what areas of their games need to improve and shows them how they measure up against top international competition.

“Seven former members who participated in the previous two tours have made a successful transition to the pro ranks on the Sunshine Tour, including former number one Kyle McClatchie, who won the Brabazon Trophy last year. We are excited to see how this year’s group will benefit from the experience.”