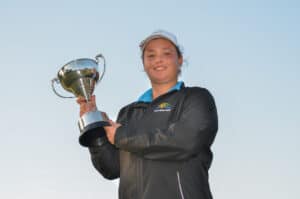 A perfect draw. That’s the shot Gabbi Venter needed to gain the advantage on Sam Whateley at the first play-off hole. And that’s the shot she executed. So well, in fact, that the Free State junior nearly won the Nomads SA Girls Championship with an albatross.

Everyone who has competed at the Gary Player Country Club, knows the course demands respect and, for 54 holes, GolfRSA No 1 Venter paid her dues.

Her go-to club barely came out of the bag. Instead of pulling out the driver, she relied on a strong iron-game to put her in the right positions, and the strategy worked. After rounds of 74, 76 and 69, she found herself tied for the lead and heading back to the par-five ninth tee-box for extra holes with fellow GolfRSA National Squad member Whateley (74, 73, 72).

Earlier, in the regulation play, Venter laid up and birdied the iconic water hole, but she knew a birdie might not cut it this time around.

“We both hit great tee shots down the middle, but I knew once Sam got on the green, she’d birdie the hole. It was that kind of a day. Sam is always a great putter, and everything was dropping on the last day,” explained the 18-year-old.

“She laid up with her second and I knew I had to go for it. I had 174m to the green – it was a blind shot because the pin was on the left behind the trees, but I felt confident about it. I flushed it and I started running. I could hear the people shouting and I saw the ball bounce right next to the flag. My heart was racing, and I was so relieved I still had that walk down and over the bridge to calm down,” 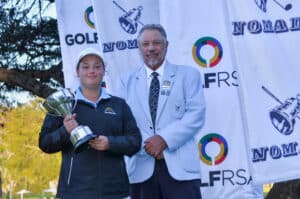 Venter’s ball had spun back, leaving her with a three-foot putt for eagle and the victory.

“The best part was walking over the bridge, the way I’ve seen so many pros do during the Nedbank Golf Challenge. I felt like a real champion. I was really nervous over the putt, and it didn’t even sink in when the putt dropped. All I felt was immense relief.

“I have had the Nomads SA Girls on my bucket list for so long that it feels almost surreal to know that I’ve won it. It’s the one junior title we all want. And to have done it at Sun City is huge for me. It’s the kind of course that you aspire to conquer. We’ve seen so many great golfers win at the Gary Player Country Club, and I’m so excited to have added my name to that list of champions. I feel like I can take on the world now.”

Despite a birdie at the extra hole, Whateley had to settle for second.

“I should be disappointed, but even I was cheering for Gabbi after that incredible shot,” the Central Gauteng golfer said. “It’s been an unbelievable privilege to play my last Nomads SA Girls here at Sun City, and to end my junior career at such an incredible venue, so no regrets.”

Ekurhuleni’s Kyra van Kan closed with a round of 70 to finish third on six over, with KwaZulu-Natal pair Anika Smit and Charlotte Millard rounding out the top five on 232. 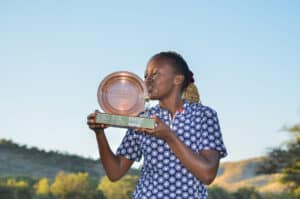 The B Division was another tight contest that went down the wire.

The two teens were neck-and-neck during the final round, but it was 14-year-old Sebata, starting the last day two shots off the pace, who came up trumps. The GolfRSA National Squad member carded a closing 85 to claim her first national title with a slender one-shot victory on 252.

The 110-strong field of the 2022 Nomads SA Girls Championship featured 45 first-time entries, many of whom who got their first taste of national level competition in the C and D Divisions. 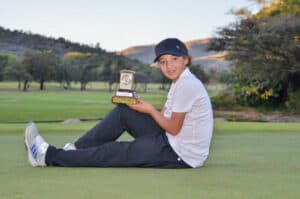 In March, nine-year-old Danielle Chong made her national debut in the Nomads SA Girls Rose Bowl Championship at Sun City’s other championship layout and the Randpark golfer finished second overall in the C Division at the Lost City Golf Course.

The youngest player to tackle the Gary Player Country Club stepped it up with rounds of 34 and 31 to finish on 65 points alongside 15-year-old Aimee-Leigh van Rooyen from North West (34, 31) and was rewarded for her bravery with the C Division Trophy in a count-out.

In the D Division, Lwazi Goba from KwaZulu-Natal also celebrated a successful first national start with a victorious debut. 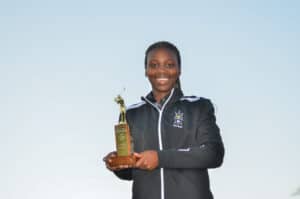 “This was the most incredible experience of my life,” Goba said. “To come here to Sun City and to play this world-famous golf course was such an honour. The course is so tough, but so beautiful and I learned so much. The resort is fantastic. There is so much to do and so many things to discover. We are so grateful to Sun International for bringing us here and for Nomads who made it possible. I am sure that I speak for all the first-timers when I say it has been a blast and I’m so sorry that this will be my first and last time. But at least I’m leaving with great memories.”

Congratulations to our four champions and all the prize winners on a fantastic performance at the spectacular Gary Player Country Club! 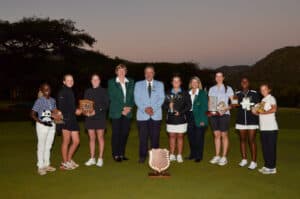