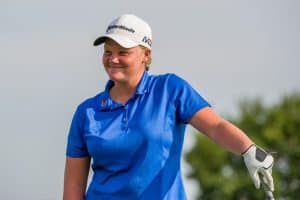 13 February 2019 – Extraordinary talent is not the only thing that sets champions apart from the rest of the competition. It is the ability to follow a plan with discipline and sticking to it with tenacious commitment and perseverance.

These are the attributes that set 14-year-old Kiera Floyd from Benoni on a winning path seven months ago and the trophies on the GolfRSA amateur circuit continue to stack up.

Floyd announced herself last year when she beat the boys with a seven-under-par 65 at the tough East Course to become the first girl to outright win on the Bridge Fund Managers Junior Series at Royal Kensington and Johannesburg Golf Club.

Following fifth place finishes in the Sanlam SA Women’s Stroke Play and the WGSA Women’s 72-Hole Championship, the Ebotse teenager broke through on the Open Amateur circuit in the Gauteng North Women’s Open.

A second victory in the Mpumalanga Open rocketed Floyd to sixth in the rankings.

Floyd carded rounds of 71 and 70 to fend off challenges from South Africa’s number two ranked Caitlyn Macnab and Youth Olympian Kaiyuree Moodley, among others.

The success at Woodhill Country Club was a direct result of the GolfRSA Elite Squad Camp at Bryanston Country Club just before the tournament.

“I drive the ball on average 280 yards, but it doesn’t always go where I am aiming. At the camp we had a session on Trackman and the coaches accessed our swings. Anna Becker-Frankel, our assistant national coach, identified a problem on my downswing.

“She told me to hit the driver like I would hit a forehand top-spin shot in tennis. I tried it and the ball started going exactly where I was aiming. It felt so amazing to have that kind of control. I was able to stick with the drill during the tournament and I missed very few fairways.”

The GolfRSA Elite Squad and B-Squad members attended a series of sessions over the three days of the camp that included diet and nutrition with Marlene Durandt, physical fitness with Sandra Winter and mental strengthening – individual interviews and group work in the classroom and on the range – with renowned sport psychologist Maretha Claassen.

“The rest of the time we had sessions with our national coach Val Holland, Anna and with Costanza Trussoni, who put us through our paces on Trackman. We did drills with a big focus on chipping and putting, and range work that included video assessments and work with wedges and shorter irons.

“I definitely learned a lot and I especially used what Maretha taught us about finishing every shot with a positive thought at the Gauteng North Girls. No matter how well or bad it’s going, you must always find something positive to take to your next shot.

“After I dropped a shot at 15 in the first round, I focussed on the good approach shot into the green, rather than the missed putt. I stayed positive and I hit the 17th green in two and holed a six metre putt for eagle.

“I had nine pars to start in the second round before my first birdie at 10, but I dropped at 11. Again, I focussed on how well I was driving the ball. I made two more birdies at 14 and 15 to take the lead. I kept the momentum going with solid pars for the win.”
Floyd is fast becoming a force on the South African amateur stage and early success this year has inspired her to chase big goals this season.

“It doesn’t matter if it’s a junior event at home or a national championship. I love golf and I want to succeed. Everything we did at the camp was designed to take us to the next level. So I will do the work. I will be disciplined. I want to keep on winning.”