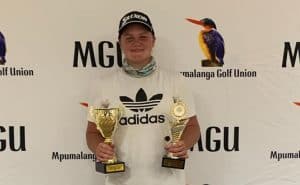 Floyd charged straight to the summit with a flawless opening round of 65 at Middelburg Country Club on 21 November and the GolfRSA Elite Squad member racked up eight birdies for a second round six-under 66 to maintain control.

When bad weather the next day forced the organisers to reduce the last 54-hole provincial showpiece of the season to 36 holes, Floyd not only landed the A-Division title for a second time in three years, but scooped the honours in the Junior Division, as well.

Floyd had won the Gauteng North Junior Girls Championship in February and the North West Women’s Open in March before the nationwide lockdown, and the double victory in Mpumalanga boosted the 16-year-old to 2nd in the Womens Golf South Africa Junior Rankings and 7th in the Open Amateur standings. 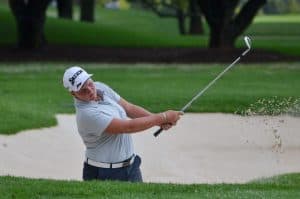 GolfRSA Elite Squad member Kiera Floyd from Ebotse Golf Estate in Benoni returned to the winner’s circle with the A- and Junior Division victories in the 2020 Mpumalanga Women’s Championship at Middelburg Country Club in November; credit Ernest Blignault / GolfRSA

The trophy finish once again emphasized Floyd’s ability to overcome diversity and her tenacious commitment and perseverance to succeed.

It is these attributes that set the Ebotse golfer on a winning path in 2018 when she recorded her first provincial win on the GolfRSA circuit and it has served her well as she continued to stack up trophies since.

And these traits helped her to overcome a major blow-out at Clovelly Country Club in October.

“I had a growth spurt last year and had to work really hard to recover my swing. Everything finally clicked in the North West Women’s Open. I shot 65, 69 and 65 at Pecanwood to win and my game felt as good as it’s ever been. Then the lockdown happened,” Floyd said.

“It was crushing. Caitlyn (Macnab), Megan (Streicher) and myself were looking forward to defending our title in Egypt at the end of March and qualify for the Toyota Junior Golf World Cup in Japan, but the lockdown meant we all had to give up on our goals and dreams for 2020.

“During the lockdown we had some great squad sessions on Zoom, which really helped us on the mental side to stay positive. I also did a lot of drills at home, but when golf was re-opened and I got back with my coach, we realised that my swing was a goner.”

“I felt we’d made good progress and I was pretty positive travelling to Cape Town. I shot 75, 73 and 73 at Clovelly to finish third last year, so I expected to be in the mix, but the moment I teed it up, I couldn’t feel my swing.

“I shot 91 in the first round and 101 in the second round. That’s a great score for cricket, but I was stunned. I never, not once in my career, shot a score that high. It was ridiculous. I only took three clubs into the final round – a 7-iron, a wedge and a putter – and managed to post an 83.

“The hardest thing was not the 101 or the tie for 37th, which was my worst result in years and years, but it was losing my swing. I knuckled down when I got back home. I wasn’t going to let this one bad experience get into my head.”

In 2018 at the age of 13, Floyd became the first girl to beat the boys on the popular Bridge Fund Managers Junior Series. Fast forward to the end of October and she did it again … this time with a four-under-par 68 at State Mines.

The three-shot triumph delivered a huge injection of confidence.

“I went to Mpumalanga with a very positive mind-set. I had confidence in my swing and I struck the ball well from the start. I never doubted my swing or that I could win,” Floyd said.

“To come back from the disaster in Cape Town to winning the last tournament of season was extremely gratifying. I’ve always believed in hard work and the last four weeks have really proven to me that when I knuckle down, I can achieve anything. The Ackerman was a great mental lesson and I will draw on that experience every time things go south.”

Floyd has set herself lofty goals for next season. 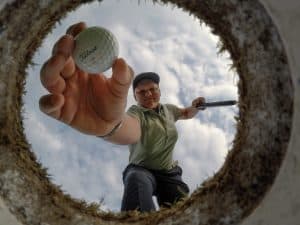 “I am targeting the Nomads SA Girls and the SA Women’s Stroke Play and Match Play Championships. I also want to reach number one in the Womens Golf South Africa Junior Rankings and top three in the Open Amateur rankings by the end of 2021.

“I finished third in the Jabra Ladies Classic in 2018 and I gained a lot of insight from playing with Nobuhle Dlamini and Anne-Lize Caudal. So I would really like to play a few of the Sunshine Ladies Tour events next year, including the Investec SA Women’s Open.

“And I don’t know if our international schedule will allow it, but I would love to win the North Regional Final of the Bridge Fund Managers Junior Series and become the first girl from South Africa to qualify for the North and South Junior Championship at Pinehurst next year. Some big goals there, but I believe you have to set yourself big targets if you want to succeed.”