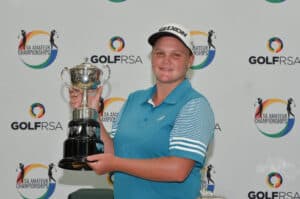 JOHANNESBURG, 8 February 2022 – Kiera Floyd broke through for the biggest win of her young career when she won the South African Women’s Stroke Play Championship by five strokes at Royal Johannesburg & Kensington Golf Club on Tuesday.

The 17-year-old Serengeti golfer has long been considered one of the country’s brightest talents, with her booming drives and sharp iron play, but has not always converted her obvious talent into results.

This time, however, there was little that would stand in her away.

After carrying a slender two-stroke lead into the final round, Floyd settled the nerves early on with a birdie, eagle, birdie start on the West Course to open a sizeable gap on the chasing pack.

Although she dropped a shot on the par-four 7th, she bounced back immediately with a birdie on the short 8th and finished the nine with a five-stroke lead over Gabbi Venter from Free State.

Floyd then stretched her lead with another birdie at the 11th and not even an hour-long weather delay could put her off her stride. A birdie on the last hole capped off a fine performance and a five-shot victory at seven under par.

“I really started to feel the nerves as I came down the stretch,” she explained. “Winning this tournament has been one of my goals for a long time and I’m so glad to have been able to pull it off. It means a lot to have this win.

“I’ve been working so hard on keeping my emotions in check and to stay level-headed during the round, especially when I hit a bad shot or miss a crucial putt. When I sunk the putt on the 18th, I could feel some of the emotions bubbling up – both relief and happiness.

Floyd now turns her attentions to the match play part of the SA Amateur Championships where, as the No 1 seed, she will take on fellow GolfRSA National Squad member Ellandri van Heerden from Free State in the first round.

“It’s a good confidence booster going into the match play,” she said. “I’d love to do the double, but I’m not getting ahead of myself. I still need to take it one shot at a time.”

Steenberg’s Bobbi Brown recovered from a poor opening round of 77 to finish on 2-under par and alone in second. The reigning Nomads SA Girls champion matched Floyd’s five-under-par 67 as the low round of the day. Her closing campaign featured four birdies, a lone bogey and an eagle on the par-five 15th.

“I never thought I would be able to climb back so many places, but I never gave up trying. I knew it would take two low rounds and I’m delighted that I put them together. This gives me so much confidence heading into the match play tomorrow.”

Brown will take on Shannon Berry, who finished 31st at her home course, in her opening match.

Venter and Legentil carded respective rounds of 71 and 72.

Glendower’s Kyra van Kan finished on one-over and will have designs on capturing the SA Amateur title that eluded her in 2020 when she lost to Caitlyn Macnab.

GolfRSA No 1 Isabella van Rooyen, on two-over, finished alone in seventh, and rounded out the top 10 with 2021 champion Megan Streicher (five-over), Cara Ford (seven-over) and her Ernie Els and Fancourt Foundation stable-mate Crystal Beukes, who also finished up on seven-over. 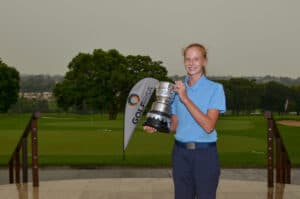 And 13-year-old Lea van der Merwe had a big reason to celebrate, too, after coming up trumps in the battle of the teens with a wire-to-wire victory in the B-Section.

The Zwartkops junior recovered from a nervy start to post a round of 83 and win by seven shots over 13-year-old Kaylee Webster. Van der Merwe’s twin sister, Ame, finished fourth, one shot behind 12-year-old Lourenda Steyn from Centurion, who made her debut in the national championship this year.

The champion and Webster will both have a shot at the coveted double when they line up in the Flight Division on Wednesday. Van der Merwe will face Goldfields’ Cheslyn Jacobs, while Webster be tested by Olivia Wood from Umhlali Country Club.