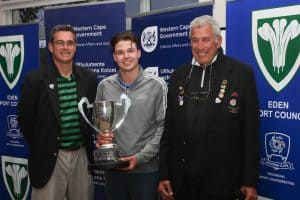 19 August 2018 – Luca Filippi from Western Province fired a final round three-under-par 69 on Sunday to win the Southern Cape Open, supported by the Western Province Department of Sport, at Plettenberg Bay Country Club.

Filippi took the 36-hole lead with rounds of 70 and 68 and carded a third round 72 to carry a two shot advantage into the final round.

He overturned bogeys at the first and third holes with birdies at four and seven to stay ahead of the chasing pack through the turn. Having surrendered another shot at the par three 13th, the Milnerton golfer rallied with three birdies on the bounce from 14 and finished with a flourish, rolling in a birdie putt at the final hole.

“It was a tournament of all seasons this year,” said the 19-year-old. “The course was pretty wet to start with after they had 70mm rain before we arrived and we had a three hour suspension due to more rain in Friday’s first round.

“We managed to finish and I started the second round two shots behind Ivan Williams, who opened with a great 68. We had good weather on Saturday and I played really nicely, making made five birdies to pull two shots clear.

“On Sunday morning, the wind showed up and my putter was pretty cold. I had three birdies, but I gave three shots back to the field. Seven guys shot 69, but I still had a two shot lead going into the final round. The wind also died down a bit.

“I struck the ball well and turned level par. We were all shaken when Ivan’s nephew, who caddied for him, suffered an epileptic fit on the back nine and had to be taken to hospital. Ivan was rattled and it was a bit of a struggle to get back into a rhythm, but we pressed on. Lucky the putter heated up over the last five holes and I could pull it through.”

Filippi followed runner-up finishes in the Western Province Stroke Play and Match Play in April with a joint victory in the KwaZulu-Natal Stroke Play in May. A tie for second in the Border Stroke Play in July preceded his success in the Southern Cape Open, which boosted the Milnerton golfer to fourth in the Open Amateur rankings.

“The KZN Stroke Play win didn’t feel like a real win, because Keegan (Mclachlan) and I had to share the trophy after daylight ran out and we couldn’t have a play-off,” said Filippi. “I think that’s why this one means so much to me.

“It’s great to have a proper win under the belt again. Last year I had to push golf to the back burner to complete matric, and I had to work really hard this year to get my ranking up again. I’m taking a lot of confidence away from this victory.

“I’m not a very long hitter, but I beat the field at Plettenberg Bay with accuracy and a solid short game. I missed very few fairways and whenever the putter ran cold, the short and irons and wedges turned Senger, tuning up for the Reply Italian Under-16 Championship next month, gave himself some momentum with a third round 69 and matched Williams with a 70 in the final round to share second with the Southern Cape stalwart.

Ekurhuleni junior Yurav Premlall, who will also join the action at the Golf Club Biella le Betulle in Italy, also showed some great form with two 70s and two 72s that netted him a share of fourth on four-under alongside Kyle de Beer from Eastern Province.

Local favourite Nicholas Mitchell carded rounds of 72, 70, 71 and 72 to tie for sixth on three under with Jordan Duminy from the Louis Oosthuizen Junior Golf Academy and Tyron Davidowitz from Boland.