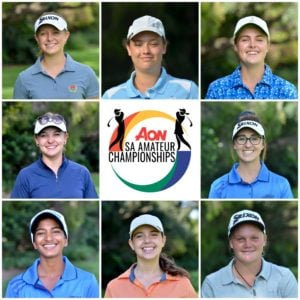 19 February 2020 – The big guns of women’s golf moved comfortably into the quarter-finals of the Aon South African Amateur Championship, setting up four mouth-watering clashes on the East Course of Royal Johannesburg & Kensington Golf Club on Thursday.

Reigning South African Stroke Play champion and the country’s No 1-ranked amateur Caitlyn Macnab kept her dream of the SA Amateur double alive as she eased past Carmen Taljaard 5&4 in the morning round and veteran Liezl Smit 4&3 in the afternoon match on the West Course.

“I feel like my game has steadily been improving since day one of the stroke play and I’m starting to sink a few more putts so I’m really looking forward to tomorrow’s golf,” Macnab said.

The Ekurhuleni golfer will face Bloemfontein’s Gabrielle Venter in the first quarter-final after the 15-year old sensationally ended Kim de Klerk’s first round challenge with a walk-off hole-in-one on the 16th hole.

She followed that up with a 3&2 win over Samantha Whateley in the second round.

“I’m really pleased with how well I played today,” said Venter. Last year I didn’t make it this far so I’m delighted to get into the quarters and we will see what happens against Caitlyn. It’s match play so anything can happen if I play well.”

No 2-ranked Kaylah Williams recovered from a slow start, where she needed extra holes to defeat Tanzania’s Madina Hussein, to reach the quarter-finals with a 2&1 win over Isabella van Rooyen.

Last year’s runner up has her sights set on going one better in 2020.

“Going into tomorrow, it’s the last day before the final, so I know I need to bring my A-game and hopefully sink a lot more putts,” said Williams. “My putting has been a little bit shabby so I just need to work on that tomorrow morning and I’ll be fine.”

To get there, the Western Province golfer will first have to get past Nadia van der Westhuizen from Ekurhuleni, who followed a 5&3 win over Kaylan Boshof with a tight 1 up win over Kera Healey.

On the other side of the draw, yet another Ekurhuleni standout appears to be the player to beat.

A semi-finalist in 2019, Kiera Floyd recorded a convincing 7&6 against Chloe Malgas-Kelpin in the morning and the 15-year-old Ebotse golfer fired two eagles en route to knocking out Bronwyn Leigh Doeg 6&5 in the afternoon match.

“I played really well today and was 10 under for the two rounds,” she said. “So I’m excited for tomorrow when we move over to the East Course. It’s a layout that really suits me and I’ve gone low there a few times in tournaments so I’ll carry that confidence through to the next round.”

So low, in fact, that Floyd beat the predominantly male field with a seven-under-par 65 on the East to win the Bridge Fund Managers Junior Series Floyd in 2018. She will face her Ekurhuleni teammate Kyra van Kan in the quarter finals in what will be a battle of the young guns after the 14-year-old dispatched Nicola Schoeman 5&3 and Reunion’s Mila Jurine 3&2.

The remaining quarter-final match up sees Ernie Els and Fancourt Foundation member Larissa du Preez square off with close friend Kaiyuree Moodley for a place in the last four.

“It’s difficult, but you need to find the mental strength to put the friendship aside and just play some golf against each other even though there is a lot on the line,” explained Du Preez, who defeated Cara Ford 6&4 and Stephanie Barbaglia 4&3.

Moodley, a 6&5 winner over Nicole Strydom, won 2 up against Bobbi Brown to advance to the quarter-finals for the third straight year. The 18-year old will be hoping to maintain her excellent touch on the greens as the women’s championship moves across to the East Course for the remainder of the tournament.

“It’s going to be a fun match. It will be a bit different on the East, but and I’ll spend some time tonight going over my course strategy for tomorrow and I’ll be golden,” she said.

The 13-year-old edged mid-amateur Heidi van der Berg 1-up in the morning session and routed Noluthando Mdanda 5 & 3 in the afternoon. The Umhlali junior will face Swiss golfer Ladina Semadeni in the quarters on the East Course.

The other quarter-finalists include Ineke Brynard – whose older sister Shani won the B-Division title last year – against Elizabeth Lightley and Anita Chen, who will battle the experienced Irene Nakalembe from Uganda. Kim Turgut and Ellandri van Heerden face off in the final match.