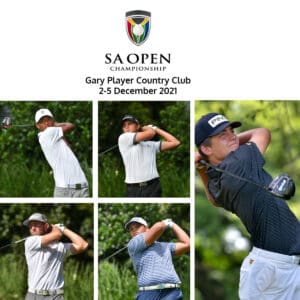 5 November 2021 – South Africa’s top-five ranked amateur golfers have been extended an invitation to play in the South African Open Championship at the Gary Player Country Club from 2-5 December, an event co-sanctioned by the European and Sunshine Tours.

The quintet, headed by reigning SA Amateur champion and current SA No 1 Christiaan Maas, will join top European and Sunshine Tour professionals in the R23 million tournament, supported by Nedbank and Sun International.

The remaining four amateurs who will tee it up at Sun City are No 3-ranked Kieron van Wyk, No-4 ranked Casey Jarvis, No 5-ranked Jordan Duminy and No 6-ranked Christiaan Burke.

“We are delighted to be able to offer these five places to the top-ranked amateurs in the country,” explained South African Golf Association (SAGA) Acting President Henk Smith. “This is recognition and reward for the hard work and fine performances they have put in over the last year.

“As amateurs, they will not be able to earn any of the record prizemoney on offer, but will compete for the coveted Freddie Tait Cup, awarded to the best-placed amateur who makes the 36-hole cut.

“Christiaan earned his place as the winner of the SA Amateur earlier this year, and the remaining spots were allocated according to the amateur ranking, with only No 2-ranked Martin Vorster unavailable as he has indicated his intention to turn professional. We would like to wish him the very best in this new chapter of his golfing journey.

“It is an important part of their development for our top players to test themselves at the professional level. Playing in their national open, on a challenging golf course and against a strong international field, will not only be a wonderful experience for our players, but will also provide a yardstick to test the level of their games.”

This year marks a second SA Open appearance for Maas, who narrowly missed the cut in last year’s event and a third consecutive start for Jarvis, the Freddie Tait Cup winner in 2020, who made the cut in his two previous appearances. Van Wyk and Duminy will play in their second and third SA Opens respectively, while Burke makes his debut in this prestigious event.

GolfRSA CEO Grant Hepburn explained that the five players are worthy recipients of their invitations to compete in the second-oldest golf championship in the world.

“We are proud that all five amateurs chosen by the selection committee are members of the GolfRSA National Squad, and we know how hard they have worked in the last year to earn the chance to tee it up in the SA Open. We know they will savour the opportunity.

“I’d also like to acknowledge the excellent structures we have in place in amateur golf in South Africa that have helped the players – and so many others like them – get to where they are in the sport. Credit must go to the many coaches, academies, foundations, golf clubs and unions that have played a major role in the development of the massive depth of talent we currently see in South African golf.”

The South African Open Championship is the second event in a thrilling three-week run of world class tournaments, co-sanctioned by the Sunshine Tour and European Tour, that will launch the 2022 season of the European Tour. The Joburg Open, to be played at Randpark Golf Club, is the first event of the new season, while the Alfred Dunhill Championship at Leopard Creek concludes the three-week South African run of events.

NOTE – Amateurs wanting to enter the qualifying round for the South African Open Championship at the Gary Player Country Club from 2-5 December can download the entry form under NOTICE BOARD on www.golfrsa.com; entries close at 14h00 on 18 November 2020.