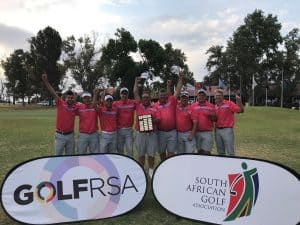 The jubilant Free State team, who won the B-Section and claimed the coveted promotion in the 2018 South African Mid-Amateur Inter-Provincial with an unbeaten performance at Kimberley Golf Club; credit GolfRSA.

KIMBERLEY, 12 October 2018 – They didn’t need it, but Free State vowed to finish the South African Mid-Amateur Inter-Provincial unbeaten and the B-Section winners held true to their word.

A bit battered and bruised after a gruelling tussle with Mpumalanga, Free State got the job done and could celebrate their first promotion in style at Kimberley Golf Club on Friday.

“Now we can pop that champagne,” said skipper Josef Fourie after his team edged out Mpumalanga 6.5 – 5.5 in the final round.

Free State defeated Boland 7.5 – 4.5 and Border 8.5 – 3.5 on day one to set a winning course in this year’s championship. While action continued on day two, the side spend their rest day enjoying the sights in Kimberley on their rest day and returned on day three to pick up where they left off.

They routed Northern Cape 8.5 – 3.5 and knocked out Eastern Province 7 – 5 to open up an almost unassailable lead and an 8 – 4 result against Limpopo in round four made it official.

“After we won the B-Section in the fourth round, we decided to put the celebrations on ice,” said manager Corne Viljoen. “If you’re going to win promotion, you should win it proper.

“The guys wanted to finish the week unbeaten. Going into the final round against Mpumalanga, we knew it would be a dog-fight. Those guys never back down, so we needed to take the fight to them. I am incredibly proud of the way the guys showed their passion and commitment to the team.”

Free State hammered Mpumalanga in the foursomes to carry a 3 – 1 lead into the singles.

The skipper, Lourens Erasmus and number one Ivan van der Merwe halved their games to make it six-for-six.

“The key to our performance this week came down to the incredible team spirit,” said Fourie.

“We didn’t have individual stars. Everyone in this team bats at number one. We played for Free State and for each other and if one guy was struggling, he knew seven others would back him up. We are absolutely over the moon.”

Viljoen lauded the team and praised their resilience in the face of adversity.

“It was touch and go in this final clash against Mpumalanga, but our guys fought like warriors,” Viljoen said. “This is an incredible celebration for the whole squad. We never took anything for granted. The players worked exceptionally hard for this last win, right down to the last putt in the last game.

“Everyone on the team dug deep this week and I’m incredibly proud of their performance. I am sure the rest of the team won’t mind if I congratulate our rookie Jandre, who scored 9 out of 12 points in his debut. And hats off to Josef, who led the team by example this week. We are very proud that our captain took the Most Valuable Player honours in the B-Section with 11.5 out of 12 points.

“Our gratitude goes to Free State Golf Union president Nicky Nel and the executive, whose support throughout our preparation and during this week has been superb. I hope this performance will inspire our juniors to go for glory in the SA Under-19 Inter-Provincial later this year. Now we celebrate and then the hard work starts for our A-Section debut next year.”

Northern Cape, with four victories and two losses, took second in the final standings ahead of Eastern Province.