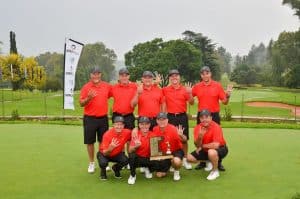 12 April 2019 – Not even Mother Nature could stop the mighty Lions from roaring to a fourth successive victory in the 32nd South African Senior A-Division Inter-Provincial, while KwaZulu-Natal sealed the Super Senior title at Wingate Park Country Club on Friday.

SENIORS
Rain and lightning put a serious damper on the final day’s action, but in the end, defending champions Central Gauteng topped the pile with 13 points with an unbeaten run in this year’s tournament.

“We started the final round with a 2-point cushion over Western Province and 3 points ahead of Gauteng North,” said team manager Andy Truluck.

“Victory is never in the bag for us until the final putt drops, and going up against Province and Eastern Province, we expected two tightly contested skirmishes. The senior circuit is highly competitive. The guys have played each other for years and they know each other so well, so you can never afford to get complacent.

“Both matches were incredibly tight from the start. We were all square in the foursomes against Western Province and we led Eastern Province 2.5 – 1.5. Going into the singles, the guys were matching each other shot for shot. Our first guys were approaching the ninth green and the last guys were on the fifth and all the games were in the balance. Then the siren went.”

“There was heavy downpour that flooded the course, but within an hour and a half, the green staff had the course ready for play,” Truluck said.

“The rain stopped, but unfortunately the lightning didn’t. Eventually the tournament committee had to make a call to abandon play for the day. With light fading, there wouldn’t have been enough time for us to compete nine holes for a result. It’s never the way you want to win, but in this case, it was the safest call. In the end, the singles were halved.

“All credit to the team for a fantastic performance all week. They are a fantastic bunch of guys with a fantastic team spirit that really played for each other. From Brian Chernotsky, making his senior debut this year, who made some crucial points for us to Jock Wellington, winning the Most Valuable Player of the tournament in his 19th senior IPT.

“It was a really tough event this year and all our matches went down the wire. We sunk a lot of pivotal putts, like the clutch putt Schalk sunk in the foursomes to win the match against Province that got us the crucial draw.

“I must congratulate Wingate Park and Gauteng North Golf Union on a fantastic event. The meals, the hospitality, the conditioning of the course was amazing. Compliments also to David – the tournament was very well run and the course was set up brilliantly for match play. All round, one of the most memorable Senior IPTs in my time and well done to all involved.”

Meanwhile Gauteng North beat both their final round opponents to finish second on 11 points, but a 7 – 5 victory over Border came too late for North West, who was left holding the wooden spoon.

SUPER SENIOR
KwaZulu-Natal began the final round on 4 points, 1 point behind log leaders Central Gauteng and second-placed Western Province, but the coastal side leapfrogged both teams with a double victory to lift the Super Senior title.

The four-man side routed Boland 4 – 2 and beat Western Province 3.5 – 2.5 to finish in the top spot on 8 points. Province settled for second on 7 points after drawing with Central Gauteng and Eastern Province.

Central Gauteng, who edged Eastern Province 6.5 – 5.5 took third on 6 points, while Boland was sent down to the B-Division after their final round loss.