While former Springbok wing Breyton Paulse was delighted to see some of the current Springboks at Sun City on Monday – and he made a point of telling them how impressed he has been with their recent Rugby Championship performances – the prolific try-scorer said the people he considered the biggest heroes at the famous North-West resort were the people behind the Sanlam Cancer Challenge.

The amateur event, being played for the 26th time, creates awareness and raises funds for the fight against cancer, with more than 40 000 participants from over 800 clubs trying to qualify for the National Finals that started at Sun City on Monday. 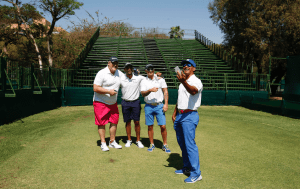 Breyton Paulse takes a selfie along with Toks van der Linde, Vernon Philander and Herschelle Gibbs during the first round of the delegates competition held as part of the Sanlam Cancer Challenge Finals 2018.

“I’ve been coming for the last five years and this event is always so special to me. It’s not about the golf, but about a wonderful cause that needs supporting. The Sanlam Cancer Challenge makes such an effort in the fight to beat cancer and I feel like part of the family now, I’m very happy to be able to come and support them and I’ve made some wonderful friendships.

“The volunteers out there are my real heroes, when people get diagnosed with cancer it is not easy and it is an emotional roller-coaster these volunteers have to deal with . It’s always an unexpected ordeal to have to go through and you never know when it might affect you. So the Sanlam Cancer Challenge people are my heroes and I always support them because it is a wonderful cause,” Paulse, who scored 26 tries in his 64 Tests, said on Monday.

Some of the current generation of Springbok stars were relaxing at Sun City on Monday and they bore the scars of their tremendous effort against the All Blacks in Pretoria last weekend.

Frans Malherbe, Schalk Brits, Handre Pollard, Damian de Allende and Malcolm Marx all made sure that before they ventured out on to the golf course, they stocked up on the sunscreen the Sanlam Cancer Challenge liberally provided on a warm day at both the Lost City and Gary Player Country Club courses.

“They are good boys and it was great to see them take some time out after a brutal few weeks in the Rugby Championship. What Rassie Erasmus and Siya Kolisi have achieved gives me great hope. The All Blacks showed why they are the number one side by stealing the win at the end, but I’m really excited by how the Springboks are playing. Rassie Erasmus is making some magic with them,” Paulse said.