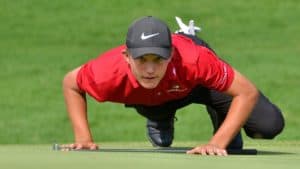 19 February 2020 – His opponent’s putter deserted him, and young gun Christiaan Maas charged through that open door on Wednesday to play his way into the quarter-finals of the South African Amateur Championships at Royal Johannesburg and Kensington Golf Club.

The 16-year-old Pretoria junior defeated Martin Vorster 1-up in the round of 16 when the African Amateur Stroke Play champion left his eagle putt on 18 agonisingly short – a putt which would have given him victory on the hole and a chance to extend the match.

Mass stepped up and nervelessly rammed home a 10-footer to seal the victory and set up a quarter-final clash with James Wilson of Scotland.

The GolfRSA Junior Protea got it to 2-up through the 11th, and it came back to 1-up on the 13th when Vorster made birdie to arrest his slide which had started with bogeys on nine and 11.

“I played extremely good golf this morning,” said Maas of his 4&3 win in the previous round over Connor Engelmohr of Germany, “And my putter was on fire. In the afternoon, my putter went a bit cold, but I managed to not make a drop against Martin. Unfortunately for him, his putter went cold on the back nine, and fortunately for me, I made a 10-footer on the last to win.

“He’s a very tough opponent. He hits it miles, great iron-play, his putter was just a bit cold today.”

Vorster had two earlier opportunities down the stretch to pull things back. After Maas hit the flag with his birdie chip on 16, Vorster missed his birdie putt on the right edge. Then, on 17, he had a three-footer for birdie and it just missed the edge. “My putting let me down today,” said Vorster.

The youngest champion in the Aon SA Amateur championship, Christo Lamprecht, overcame a shaky 2-up win in the morning over Connor Wilson of Scotland to run out a 4&3 winner over Koen Kouwenaar of the Netherlands.

Reigning SA Stroke Casey Jarvis kept his ‘double’ dream alive when he overcame the left-handed Nicolas Muller of France on the 20th hole in a tough match. Jarvis’ win came after 4&2 win over compatriot and 2019 finalist Jordan Duminy in the morning.

One of the most impressive performances on the day came from England’s Olly Huggins, who pulled off a pair of 4&3 wins – over Nash de Klerk in the morning, and over the imposing Nordin van Tilburg of the Netherlands in the afternoon.

He got it to 5-up through 12, but then Van Tilburg came back at him. “I knew he was going to come back at me with a couple of birdies,” he said. “I was ready for it, and he holed some really good putts coming in, and I just made a 20-footer on 15 to close him out.”

He will be up against countryman Jack Bolton who prevailed 2-up over their compatriot Haider Hussain – and that’s the match-up that Huggins was keen to have.

In the other afternoon matches, Joseph Long of England defeated South Africa’s Luca Filippi 3&2, James Wilson of Scotland beat England’s Robin Williams 4&3, and Aneurin Gounden went all the way to the 21st hole before he downed Gergory McKay – and that was after he took 19 holes to defeat Scotland’s Darren Howie in the morning.

For Maas, there is the thrill of playing in the quarters that awaits him: “I’m taking a lot of confidence from the win into the quarter-finals,” he said. “Now I know I’ve beaten Martin who has won all over the world and he’s a great player. I feel like my game’s almost there, but I must get a little bit better.”