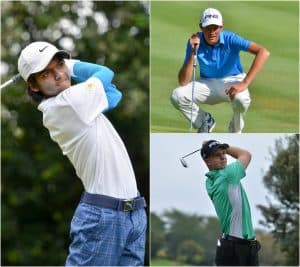 28 June 2018 – The final round of this year’s Dimension Data Junior Open is shaping up for a mouth-watering finale after local heroes Christo Lamprecht and Martin Vorster tied for the lead in  Under-19 competition and two-time SA Under-13 champion Amilkar Bhana drew six shots clear in the Under-15 Challenge in George on Thursday.

Lamprecht fired a flawless seven-under-par 65 at the Outeniqua Course at Fancourt to set the second round target at nine-under 135. Overnight leader Vorster responded with a bogey-free 66 to take back a share of pole position.

In October last year, Lamprecht beat Vorster by two shots in the Lion of Africa Junior Open at Clovelly and added a third trophy to his collection when he won the Joburg Junior Open in December. 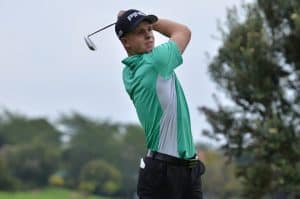 “I think it must be my turn,” joked Vorster. “Christo and I have both been in the academy for years and we are good mates on and off the course. We also know each other’s games really well, so it will be a bit of a dog-fight. All I can do is to stick to my process. But he won his Dimension Data Junior Open at Fancourt two years ago, so hopefully it’s my turn at Kingswood.”

Vorster had just one red number on his card in the first nine holes, but the putter warmed up on the homeward loop.

“I birdied 10, 13 and 15 to get to seven under,” said the 16-year-old from Mossel Bay. “I knew Christo turned eight-under, so I needed to birdie at least one of the last two holes to stay in touch.

“I had 176 metres flag on 17. The pin was front left and you can’t go for it because of the water left and in front. I hit 7-iron to the right side of the green and holed a 10 metre putt for birdie. At 18, I hit a 3-wood down the middle and sand-wedge in. The ball pitched behind the hole and I made the six-metre putt for birdie.” 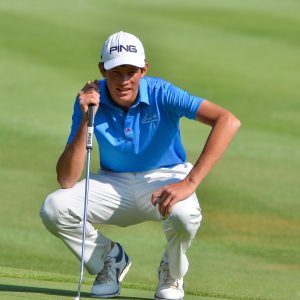 Lamprecht from George got off to a fast start.

“I hit a good drive just short, chipped it to six foot and made the putt for birdie at the first,” said the 17-year-old Outeniqua High scholar. “I hit probably my best drive of the day at the second, a soft 7-iron just short of the green and chipped it give. It was a great way to start.”

The former Sanlam SA Amateur champion added a birdie at six and a trio of gains from the eighth moved him to seven-under.

“I made a good up-and-down for birdie at eight, holed a 10-footer at nine and boxed another 10-footer at 10,” he said. “The putter went quiet. I made one more at 13, but I missed chances at 16 and 17. It’s great to go into the final round with Martin. And we’ve got Jordon Duminy, another Louis Oosthuizen Junior Golf Academy member, in our four-ball, as well. It should be a really good contest.”

Duminy and former Nomads SA Boys U-13 champion Martin Galant from Western Province will both be in the final group. The pair tied for third on two-under with Marcus Taylor from Central Gauteng.

The Southern Cape junior carded a three-under 69, Galant from South African Golf Development Board returned a 71 and Taylor from Dainfern signed for 72. 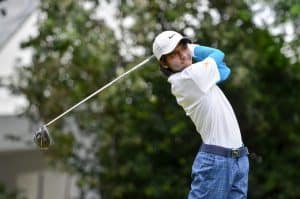 Amilkar Bhana carded 71 at the Outeniqua Course at Fancourt on day one and started the second round at Kingswood Golf Estate in second, two behind Rori Nkosi from North West.

The 13-year-old Gauteng junior overhauled Nkosi for the lead with a birdie-birdie start. Bhana cancelled a bogey seven at the very next hole to remain in pole position and erased another drop at 11 with a birdie at 13. Despite finishing with successive bogeys, an even-par 72 left the Country Club Johannesburg golfer six shots clear on one-under 143.

Nkosi returned an 80 and moved to second on-over. The Pecanwood junior is one shot clear of Matthew Dennis and Ian Snyman.

Dennis from Gauteng flew out the blocks with an eagle-birdie-eagle start, but couldn’t maintain the form and returned a 74. Snyman from Gauteng North carded 77.

Meanwhile the hole-in-one tally in the tournament swelled to three.

Kingswood junior Franco Gericke hit a perfectly-timed 9-iron from 132 metres into the 18th hole at his home course and watched his ball drop for one, and Brendan Porter from Gauteng holed out with a 9-iron from 138 metres at the par four fourth at the Outeniqua Course.