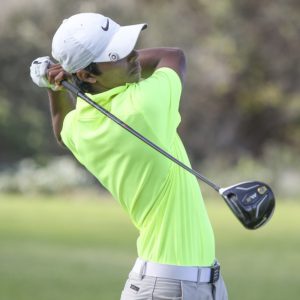 14 December 2017 – Western Province and Ekurhuleni will duke it for the A-Division title in the 2017 South African Under-19 Inter-Provincial, while Eastern Province needs to pull a rabbit out of the hat to deny North West promotion in Friday’s final round at East London Golf Club.

A mighty North versus South clash is on the cards between Ekurhuleni, chasing their first success in the A-Division since the format change in 2012, and 2014 champions Western Province.

It will be all to play for after Western Province routed Southern Cape 7 – 5, while Ekurhuleni defeated Boland 7 – 5 and drew against Gauteng North in Thursday’s fourth round.

Needing victory to stay in the hunt after their loss against Central Gauteng, Idrees Saban, Sam Simpson, Deon Germishuys and Luca Filippi stepped up to the plate and secured the four crucial points to guarantee Western Province’s success.

Ekurhuleni led Boland 3 -1 and tied 2-all with Gauteng North in the Foursomes.

Nash de Klerk, Warwick Purchase, Ryan van Velzen and Jayden Schaper racked up four points to square 6-all with the Daisies and the same quartet produced the victories against Boland to secure the victory.

After five matches apiece, Ekurhuleni leads the log with nine points and have 35 games points, while Western Province has eight points, but lead the games points with 37.

Defending champions Central Gauteng, with seven points and 37 games points, are out of the championship, but they will be gunning for second against on KwaZulu-Natal on Friday. Gauteng North ensured their survival with a 6-all draw against Boland, but expect the Daisies to take come out guns blazing against Southern Cape for their first win of the week.

The drama continues in the B-Division after North West thumped Border on Thursday. Unbeaten in four matches and emerging as a serious contender at their home course, the local favourites were booted out of the battle for promotion by a rampant North West team.

Spurred on by their 12 – 0 whitewash over Northern Cape and a 9.5 – 2.5 result against Mpumalanga in round three, North West handed Border a 9 – 3 drubbing to extend their lead to two points.

The team sits on 10 points, and even if Border scores a clean sweep against Limpopo in the final round, they won’t be able to reach the 50 games points North West has in hand.

Their neighbours, however, has an outside chance to win the battle for promotion, but it will require an almighty push.

Eastern Province amassed eight points and 40 games points with a 10 – 2 victory over Limpopo and a 9.5 – 2.5 result against Northern Cape, but in order to beat North West in the final round, the Nelson Mandela Bay side has to score a clean sweep.

In the other final round matches, Border play Limpopo and Mpumalanga take on Free State.