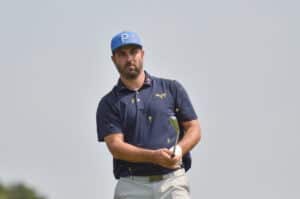 Western Province skipper Andrew Georgiou led his charges to a third successive victory and pole position on the log on moving day in the 2021 SA Inter-Provincial at San Lameer Country Club; credit GolfRSA.

15 September 2021 – Some epic battles are on the cards as teams will attempt to bank the maximum number of points in the morning session on day four at the 60th South African Inter-Provincial at San Lameer.

“With severe weather predicted for Thursday, we took a decision to switch the format to singles in the morning and foursomes in the afternoon,” said Manager: Golf Operations Eden Thompson. “This will afford the teams the opportunity to play for the largest number of available points in case we are forced to shorten play.”

It’s been eight years since Western Province and Boland shared the trophy in Port Elizabeth, but Cameron Johnston’s charges have been in formidable form on the South Coast and have put Province in a strong position after reeling in a third successive victory on moving day.

The side tied Ekurhuleni in the foursomes, but in the afternoon, the new caps Jack Buchanan, Shaun le Roux, Willie Olivier, Sean Cronje and their captain Andrew Georgiou dug their heels in and secured 8 – 4 result.

This cemented Western Province’s position at the top of the log, and no doubt, the eight-man team will be looking to rack up more points in their fourth-round clash with North West. And Province will have to bring their A-game, because last year’s B-Section winners won’t simply roll over.

Despite losing to Gauteng North in round three, North West has been formidable. Sitting in second on the log with five points and 19 game points, the side is still in a position to vie for the title.

The Daisies certainly made the most of moving day to score their first win of the week after taking a commanding 3.5 lead in the foursomes against North West. Gregg Gilson, Tyron Taylor and Armand van Dyk claimed 3 points, while Handre Truter and Dawid Opperman both halved their games to help the side to a 7.5 – 3.5 win.

Gauteng North will face Southern Cape on day four and they can expect a tough match.

The Garden Route side fought fiercely in the singles to draw against Central Gauteng, but with just 1 point for the week, Southern Cape must turn the tide in the next two rounds to avoid the dreaded relegation.

B-SECTION
Meanwhile Eastern Province showed their neighbours no mercy, routing Border 10 – 2 to surge back into contention in the title fight for promotion. 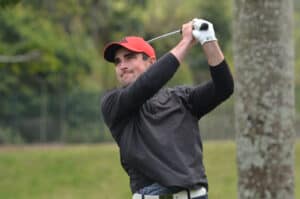 Pieter Zietsman’s 6 & 5 win in the singles on day three of the 2021 SA Inter-Provincial set the ball rolling for his Eastern Province team-mates, who rallied to defeat Border 10 – 2 at San Lameer; credit GolfRSA.

The two teams were evenly matched in the foursomes and both banked 2 points, but Pieter Zietsman got the balling rolling with a 6 & 5 win. He was backed by Jean Pierre van der Watt, Tiaan van der Bank, Altin van der Merwe and Kyle de Beer, who boosted the side’s tally to seven.

Thanks to Free State – who held the overnight log leader Boland to a 6-all draw – Eastern Province will start their day four clash against Boland in pole position on 6 points. Their opponents are just 1 point adrift, though, but EP does have a slight game points advantage of 2.5.

Free State will face KwaZulu-Natal, who is definitely in the running after a convincing 9.5 – 3.5 result against Mpumalanga boosted the local heroes to third in the log on 4 points. KZN also has 25 game points, which could prove invaluable if the chase for glory goes down the wire.

And the final match on day four promises to be humdinger, because Border and Mpumalanga are both still hunting their first win of the week.

Click HERE to view the A-SECTION results and live scoring.

Click HERE to view the B-SECTION results and live scoring.