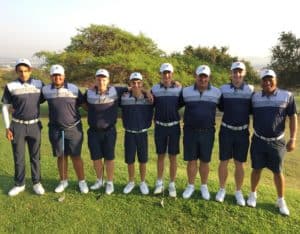 18 September 2019 – Southern Cape is hot on heels of A-Section log leaders Ekurhuleni while North West made a bold statement in the battle for promotion on day three of the 59th South African Inter-Provincial, sponsored by Tempest Car Hire, at Mbombela Golf Club.

Ekurhuleni put Central Gauteng on the back foot with a strong assault in the foursomes on Wednesday, taking a 3 – 1 lead into the afternoon session. Although the defending champions hit back hard, Brandon Gildenhuys, Casey Jarvis, Yurav Premlall and Jayden Schaper upheld their advantage and secured a 7 – 5 result.

The Roses retained the top spot in the standings on 5 points, but Southern Cape are within striking distance of their 21 games point total.

Ekurhuleni captain Jordan Burnand believes they will have to step it up even more on day four.

“Western Province beat KwaZulu-Natal 8 – 4 to get their first win in the tournament and they will want to carry that momentum into our match on Thursday,” Burnand said. “Our foursomes pairings worked really well for us against Central Gauteng, so we’ll stick with it and push for an early lead. Then we’ll just keep pushing in the singles. We only have a 1 point lead, so it’s a key match for us.”

Southern Cape moved into second spot on the log with a decisive 7 – 5 win over Gauteng North.

The two teams drew the foursomes, but number one Martin Vorster beat Werner Deyzel 5 & 4 to steer Southern Cape on a winning course.

“Martin and our IPT stalwart Ivan (Williams) are the only two returning members of our team, so we play Ivan at number eight and Martin at one and that strategy paid off for us,” said Southern Cape manager Heinrich Lourens. “Ivan won his game and he was backed by our rookies Ivan Verster and Damian Osner. We were always ahead in the singles and our other new caps James Murray and Jordan Duminy both halved their games to get us the win.

“We are 1 point behind Ekurhuleni and we’ve got 18.5 game points to their 21, so the boys know they will really have to step it up against KwaZulu-Natal on Thursday so we can reduce the gap. The A-Section is incredibly tight this year and if it comes down to game points, we want to know we did everything we could to give ourselves a shot at the title.”

Central Gauteng mid-amateur Wendell Bossenger fired three birdies, an eagle and a hole-in-one on the 13th hole on his way to a 5 & 4 win against Aneurin Gounden from Ekurhuleni and his feat left the youngsters on the team fired up for their fourth day clash against Gauteng North.

“We are tied for third with Gauteng North and definitely not out of the running; Wendell really stoked the team spirit with that performance and the guys are psyched to come back from today’s loss.” 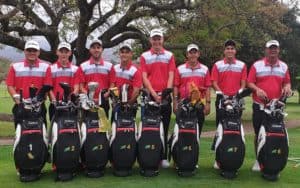 B-SECTION
North West routed Border 10.5 – 1.5 to surge back into contention in the title fight for promotion.

Taking a 3.5 – 1.5 lead into the afternoon session, Nash de Klerk drew first blood with a 7 & 6 win and Oliver Goldhill kept the leaderboard ticking over with a 6 & 5 result.

“Boland drew against Eastern Province, while Free State beat Mpumalanga 7.5 – 4.5, so that leaves the promotion battle wide open,” said North West skipper Smith. “We all have five points. Boland leads with 25.5 game points, we are second with 23 and Free State has 22.

“It’s wide open and everyone is going in guns blazing on Thursday to get the top spot. We are facing Boland and it will be a humdinger. Free State are also in for a tough battle against Eastern Province, but if we stick to our game plan, we can pull it through. The spirit in our camp is unbelievable. We win together and we lose together and it’s really an honour to captain this side.”

The last match on day four also promises to be an action-packed thriller as local heroes Mpumalanga and Border hunt their first victory in the tournament.