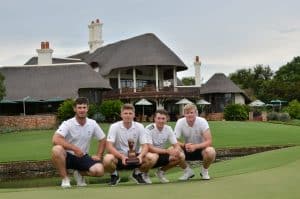 13 February 2019 – Slow and steady won the race for Team England, who overcame a 10-shot overnight deficit to deny the GolfRSA Juniors a second successive win in the Africa Amateur Stroke Play Championship at Leopard Creek on Wednesday.

The defending champions opened up a commanding lead with rounds of 217 and 206 to start the final round of the 54-hole Team Competition on nine-under with England, Sweden and Team South Africa a distant second.

While the rest of the field wilted in the Bushveld heat, though, the Roses kept a steady foot on the gas pedal.

Landsdown’s Joe Long fired three birdies on the bounce from the fourth and made three more on the trot from 10. The skipper overturned a bogey at 14 with a birdie finish for a five-under 67 to give the team a well-timed boost.

David Langley from Castle Royle closed the gap on the frontrunners to four shots with a four-under 68 and Rowland Castle’s Billy McKenzie’s run of straight pars from the seventh for a 74 took England to a final round total of 209.

Meanwhile the GolfRSA Juniors struggled on the homeward stretch.

Missed opportunities and a rush of bogeys over the closing holes proved too costly for the GolfRSA Juniors. Samuel Simpson and Martin Vorster posted a pair of 73s and a 74 from Jayden Schaper meant the defending champions came up one shot short of England’s six-under 642 target.

“We are absolutely delighted with the win. It was a much tougher week than any of us anticipated. This is not one of the top courses in the world for nothing. It’s very demanding off the tee and the conditions added to the challenge.

“Bogeys, double bogeys and even triple bogeys come quickly at Leopard Creek, especially if you get too aggressive. Tom (Plumb) put us in the running with his 67 in the second round and today, every guy had a job to do. We stayed patient, tried to keep the bogeys to a minimum, played for the best score we could put together for the team and got the job done.”

Scotland’s Euan Walker eagled the tough par five closing hole for a five-under 67 to surge into a four-shot lead and his effort boosted Team Scotland to third on 648. Jim Johnston contributed a 70 and Kieran Cantley‘s 76 to their 213 final round total.